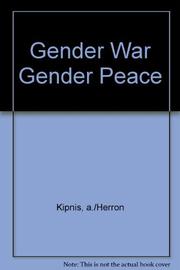 NON-FICTION
Released: Feb. 19, 1994
GENDER WAR/GENDER PEACE: THE QUEST FOR JUSTICE BETWEEN WOMAN AND MEN
by Aaron Kipnis, illustrated by Elizabeth Herron
NON-FICTION
Released: Feb. 19, 1994
GENDER WAR/GENDER PEACE: THE QUEST FOR JUSTICE BETWEEN WOMAN AND MEN
by Aaron Kipnis, illustrated by Elizabeth Herron
A rambling analysis of why the sexes don't get along and what to do about it, based on dialogues during a wilderness seminar. Acknowledging their debt to Robert Bly, Kipnis (Knights Without Armor—not reviewed) and Herron lead eight other men and women on a camping trip to find ``soul-utions'' to sexual conflict. The campers ``build a ground for ritual conflict'' and pass a ``talking stone'' around the fire, sharing their fears and resentments about the opposite sex. They readily agree that gender stereotypes are based on fact: Men are hunger-warriors, women are nurturers and gatherers. One man kills a rattlesnake, an event that helps divide the group for a while into separate men's and women's camps. These reunite to discuss men as heroes and abusers, women as victims and abusers. One woman apologizes to her partner, a ``weak'' man, for dominating him. Along the way, the authors insert quotations from Ashley Montague, Alfred Adler, Naomi Wolf, Betty Friedan, together with smatterings of myth from different cultures. The goal of gender justice is based on an idea attributed to Margaret Mead that ``when one gender suffers, by virtue of unfairness or inequality, the other also suffers.'' Women earn less money, while many men are trapped in dangerous blue-collar jobs. The injustice of turning class inequities into gender war is touched on. The ``soul-ution'': instead of competing for, say, health-care funds (breast versus prostate cancer), the sexes should join forces for the common good. Women should be drafted and work blue-collar jobs. As for date rape and sexual harassment, men should stop thinking women mean yes when they say no, and women should say no more clearly. Hardly earthshaking stuff. Nonetheless, the plucky, if hokey, confrontations of the campers—punctuated by cries of ``Amen, brother,'' ``Ho!'' and ``Make it So!''—raise serious issues in an amusing, provocative, and accessible way. Read full book review >