Andrew Voelker received his Bachelor of Science in Business Administration from Miami University (Oxford, OH). He was a member of Chicago’s The Writer’s Workshop from 2008-2011 where he studied fiction under Jerry Cleaver. Andrew was raised in New Jersey and now lives in Grand Rapids, MI with his wife.

“An exciting, elegant novel that uses painful realities to create a powerful tale about the nature of relationships.”
– Kirkus Reviews 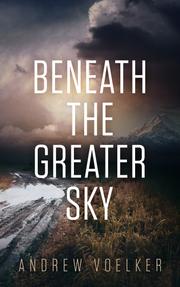 Beneath the Greater Sky

In Voelker’s debut novel, a man goes on a mission to Wyoming while grieving his stillborn daughter.

Ryan Quinn lives in a suburb of Chicago with his expectant wife, Kathy. They reside in horse-farm country, with marshes and geese scattered around an ideal landscape that lends itself more to mist than strip malls. Their domestic tranquility is shattered, however, when Kathy senses a problem with her pregnancy, and she soon loses the baby. Devastated by the loss, the two decide to separate, and Ryan moves to downtown Chicago. When he hears that his grandfather Henry in Wyoming is in the hospital, he heads west, bringing along a quilt originally intended for his daughter, which he plans to bury in the mountains. When he gets to Jackson Hole, he finds it abuzz with news of a missing girl. As local tensions rise, he encounters hostility and suspicion, complicating his already difficult trip. Ryan’s grandfather, who lives near Jackson Hole, is a salt-of-the-earth World War II vet whose vivacious demeanor and soulful advice help to make this story more contemplative than melancholy; he offers both insight and comic relief. Ryan is a surprisingly capable character, seemingly handy with everything, yet as he heads up into the Tetons, he encounters forces he may not be able to control. The April landscape, “where rags of snow lay in the shadows,” simultaneously offers ample placidity and plenty of danger. Voelker’s writing is concise and full of dead-on descriptions and well-timed details of scrappy fights, small-town innuendo, and the grotesque. Ryan moves easily between wildly disparate environments, and the author’s use of short, italicized flashbacks will keep readers interested about the past, even as tension in the present day ramps up. This novel is exciting enough to please those looking for a simple adventure, but the quality of the carefully crafted, often gorgeous prose makes it a far more important story, and Voelker is talented enough to keep readers wanting more. Overall, it’s an impressive debut, with a conclusion that’s as reflective as it is cathartic.

An exciting, elegant novel that uses painful realities to create a powerful tale about the nature of relationships.

Beneath the Greater Sky: Kirkus Star