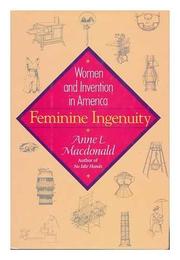 NON-FICTION
Released: May 1, 1992
FEMININE INGENUITY: WOMEN AND INVENTION IN AMERICA
by Anne L. Macdonald
NON-FICTION
Released: May 1, 1992
FEMININE INGENUITY: WOMEN AND INVENTION IN AMERICA
by Anne L. Macdonald
Macdonald (No Idle Hands, 1988) presents a sprightly, informative chronicle of women inventors in America—a two-steps- forward/one-and-a-half-steps-back history that aptly mirrors the rise and fall of feminist movements over two centuries. American females owe their start in inventing, Macdonald says, to the Patent Act of 1790, created by a new Congress eager to encourage technological progress and to open the patent system to all—including women—on an equal basis. Soon, despite the formidable social, economic, and psychological barriers that remained, patent applications from women began to trickle in. Inventions sprang, naturally, from the environments in which the inventors found themselves—the vast majority of patents for women's inventions were granted for household items, gynecological products, and fashion innovations—though, particularly during wars, when more women ran farms and business, female-invented technical devices useful in agriculture and in battle (including milking machines and periscopes) won patents as well. Macdonald, who herself has received a patent for a knitting device, exhibits humor and empathy when describing others' applications (``spiritualism'' fads led to claims by some that inventions first appeared in divine visions; other applicants, hoping to speed up the slow application process, bombarded the patent office with pleas of poverty or boasts about their products' popularity). She draws prescient parallels between advances by women inventors, who grasped at the right to their own intellectual property long before they won the right to any other, and the state of feminism in their times. But as of 1988, Macdonald says, the percentage of patents granted to women had climbed to a mere 5.6—an apt example, she suggests, of how far the feminist movement still has to go. Captivating history—a stimulating, highly readable contribution to women's studies. (Black-and-white illustrations throughout.) Read full book review >