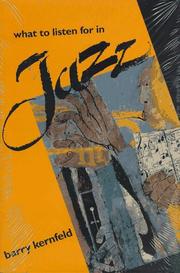 NON-FICTION
Released: May 17, 1995
WHAT TO LISTEN FOR IN JAZZ
by Barry Kernfeld
NON-FICTION
Released: May 17, 1995
WHAT TO LISTEN FOR IN JAZZ
by Barry Kernfeld
A book-and-CD set introducing jazz to the uninitiated. Kernfeld (editor, The New Grove Dictionary of Jazz, not reviewed) takes an analytical, listening-oriented approach to the music, focusing on seven areas: rhythm, form, arrangement, composition, improvisation, sound, and style. He draws from 21 well-known recorded selections, using them as springboards for his often insightful analyses. Key artists such as Louis Armstrong, Count Basie, Duke Ellington, Charlie Parker, Miles Davis, Sun Ra, and Ornette Coleman are used to demonstrate the variety of individual expression in jazz, as well as the overall continuity that links their diverse styles. This book will appeal most strongly to students and teachers of jazz, because it offers musical analysis with enough of an enthusiast's edge to give a balance to what would otherwise be a purely scholarly discussion. In fact, it is in the asides that Kernfeld's true personality shines (for instance, in his description of Coleman's ``Honeymooners'' as ``delightfully twisted...funky dance music'' or noting how the out-of-tune tonality of New Orleans revivalist Kid Thomas Valentine's band ``contributes to the essential sludge in the sound''). Kernfeld also makes some telling observations, showing, for example, that the modal jazz style of the '50s is based more on slow-moving chord harmonies than on medieval modes. The plethora of notated examples makes for some heavy sledding, and there are a few mysterious choices made in the accompanying CD (not included for review, but according to a list of its contents, for example, Kernfeld will compare two takes of a particular recording in the text, but only one of the two will be offered on the CD- -often the better-known and more easily accessible version—which is certain to frustrate the reader). Deserves to find a home in academic halls, although less essential for the home bookshelf. Read full book review >