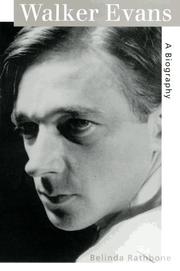 NONFICTION
Released: June 8, 1995
WALKER EVANS: A BIOGRAPHY
by Belinda Rathbone
NONFICTION
Released: June 8, 1995
WALKER EVANS: A BIOGRAPHY
by Belinda Rathbone
Serviceable and cautiously polite, this first full-length biography of photography giant Evans is nonetheless a long overdue contribution to scholarship. Rathbone, a photography curator and historian, met Evans when she was an aspiring photographer seeking his guidance, and she continues to treat him with reverence in this carefully researched life study. Evans (19031975), of Presbyterian St. Louis heritage, was son of a middle-class adman. As a teenager, he came east to prep at Loomis and Andover, dallied in college at Williams for awhile, then traveled to Paris. While riches eluded Evans throughout his life, he comported himself as an aristocrat and viewed the world from that privileged position. Inspired by European Modernists, he took to documentary photography early in the century, when its art potential had yet to be tapped. Working odd magazine assignments, then at length for the government's Resettlement Administration, Evans took his painstakingly elegant portraits of plain people and vernacular architectural studies in New York City, Havana, and the rural south of the Depression era, captured most memorably in his collaboration with James Agee, Let Us Now Praise Famous Men. (Rathbone is most arresting in her descriptions of Agee and Evans trying to ingratiate themselves with the Alabama sharecropper community they were sent to record.) Aloof, remote, and driven by an inner personal esthetic, Evans is seen experimenting in romantic and sexual dalliances before moving through two troubled marriages. By the 1950s and '60s, younger protÇgÇs Robert Frank and Diane Arbus sought Evans out, recognizing the singularity of his documentary vision. While Rathbone's study competently traces Evans's life course, it only tiptoes around questions of character and motivation. Rathbone tells why Evans's vision of America was archetypal and powerfully original, but his persona remains an elusive presence behind the work. (24 pages b&w photos, not seen) Read full book review >