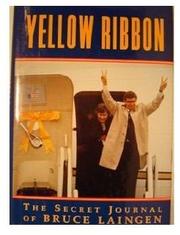 HISTORY
Released: Aug. 31, 1992
YELLOW RIBBON: THE SECRET JOURNAL OF BRUCE LAINGEN
by Bruce Laingen
HISTORY
Released: Aug. 31, 1992
YELLOW RIBBON: THE SECRET JOURNAL OF BRUCE LAINGEN
by Bruce Laingen
The personal journal of the highest-ranking US envoy to be interned during the 444-day siege that became known as the Iran Hostage Crisis. Relatively speaking, Laingen was fortunate. Posted to Tehran in mid-1979 as chargÇ d`affaires while Washington decided whether to accredit a full-fledged ambassador to the theocratic regime that overthrew the Shah, he was away from his office when militant ``students'' seized the American embassy and took its staff prisoner. Consequently, the author spent all but the last three weeks of his confinement with two subordinates in the reception rooms of the Iranian Foreign Ministry. More like birds in a gilded (if dirty) cage than political prisoners, the three detainees had access to books, newspapers, radio, and TV; they also had plenty to eat, endured no physical or psychological abuse, and received periodic visits from fellow members of the local diplomatic community. Constant contacts with the outside world enabled Laingen (who turned 58 during his ordeal) to keep an impressively detailed log of his captivity and to remain informed on current events, including the ayatollahs' efforts to make an Islamic state of Iran. Much of the material here, including letters to his wife and three sons, was spirited out of the chancellory by Swiss colleagues. Taken together, the near-daily entries offer an affecting, albeit kaleidoscopic, account of a good and decent man's response to protracted adversity. Lonely, hopeful, despairing, frustrated, resigned, and outraged by turn, Laingen relied on traditional values—duty, honor, country, family, religion—to sustain himself. That these oft-deprecated virtues obviously helped him through some very rough times represents the most important message of this low-key testament. (Illustrations, including facsimiles of journal entries smuggled out of Iran.) Read full book review >