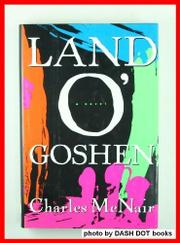 FICTION & LITERATURE
Released: Nov. 1, 1994
LAND O'GOSHEN
by Charles McNair
FICTION & LITERATURE
Released: Nov. 1, 1994
LAND O'GOSHEN
by Charles McNair
A young orphan battles the forces of the ruling Christian right wing in this slightly futuristic, often clumsy Southern fantasy by first-time novelist McNair. The time is the near future, the place Goshen, Ala., and the forces of conservative, evangelistic Christianity have taken over the United States government after a violent second civil war. The nation is now headed by The Father, a charismatic dictator whose burning eyes stare from every television channel, whose New Constitution forbids citizens to take his name in vain, and whose military forces, the Christian Soldiers, ransack the countryside in search of cigarette smokers, homosexuals, single mothers, and other enemies of the state. Fourteen-year-old Buddy, whose parents were killed in a factory explosion and whose revered older brother, Randy, was shot through the heart during a rebel uprising, has fled an orphanage to live alone in the deep woods outside Goshen. Longing for his dead brother, swearing vengeance on the Christian Soldiers for his death, Buddy expresses his anger by donning a terrifying monster costume at every full moon and frightening random groups of Christian citizens half to death. On one of these forays, Buddy encounters pretty, 15-year-old Cissy, whose own mother has just died, whose Christian, war-hero father is long gone, and who is perfectly happy to follow Buddy to the forest and share his idyllic, pagan life. Amiable kids at heart, Buddy and Cissy find it easy to bury the hatchet as far as their families' political differences are concerned; they frolic happily in their private paradise, trading life stories and making love among the fox fire and the ``See-Me-Know-Me'' trees—until the Christian Soldiers arrive to wreak revenge. An ingenuous blend of Huckleberry Finn and 1984 that entertains but rarely convinces. Read full book review >