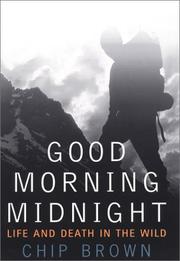 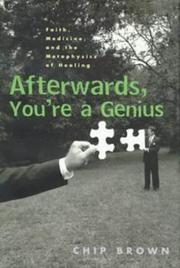 BIOGRAPHY & MEMOIR
Released: Jan. 1, 1999
AFTERWARDS, YOU'RE A GENIUS: FAITH, MEDICINE, AND THE METAPHYSICS OF HEALING
by Chip Brown
BIOGRAPHY & MEMOIR
Released: Jan. 1, 1999
AFTERWARDS, YOU'RE A GENIUS: FAITH, MEDICINE, AND THE METAPHYSICS OF HEALING
by Chip Brown
An entertaining and insightful exploration of the relation between spirituality and healing by a journalist taking an exhilarating, often confounding trip into the world of healing hands, chakras, spirit guides, and the paranormal. In this first-person account, Brown, a former reporter for the Washington Post, shares with readers his mind-blowing experiences with and his reactions to a psychic, a practitioner of transformational aura balancing, and various hands-on healers trained in the art of manipulating the human energy field. He describes himself as caught "in the old quarrel between the heart and the head, where the heart signifies the hunger for faith and the head expresses the compulsion to doubt," and his efforts to reconcile these two forces provide the book's central theme. His descriptions of the characters he meets on his journey into the world of alternative healers are choice. If there's any mockery, it's directed only at himself. In the end he is still vacillating, skeptical of his own enthusiasms but longing to believe. Besides the personal story, Brown provides some background on the schism between mainstream medicine, with its emphasis on the mechanics of matter, and alternative medicine, with its focus on the immaterial. He describes how the 1909 Flexner report on medical education in the US shaped modern medicine, and he traces the link between Franz Mesmer's 18th-century animal magnetism, Wilhelm Reich's orgone energy, and today's "therapeutic touch." Brown ponders the relationship of the body to the mind, the conflict between faith and reason, the role of spirituality in healing, the lack of humanity in the practice of modern medicine, and always the probability of the impossible. No answers here, but a pleasurable trip through unfamiliar territory in the company of a curious mind and lively intelligence. Read full book review >