Claudine Carmel grew up on the south coast of England and now lives in the Pacific Northwest. She is an author and illustrator and is never happier than when she has had a full day of creating imaginative stories. Her books have received starred reviews, award nominations, and “best of” honors. Her education has always had a basis in visual storytelling that included photography, multimedia studies, film production, and screenwriting. When she isn’t dreaming up colorful worlds, she can usually be found beside her cheerful Boston terrier on long coastal walks. 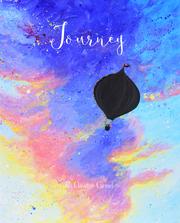 In this illustrated children’s tale, two friends go on a ballooning adventure.

A child and a dog decide to see something of the world, so they step into a hot air balloon. The two travelers lose their way for a time as wind, rain, and mist obscure their surroundings. As they drift through storms, sunshine, and snowflakes, the friends discover that even bad-weather days have “their brighter moments.” They see beautiful and varied sights as they float above everything, guided by the stars until their safe return home. Carmel (Lucy Lick-Me-Not and the Day Eaters, 2014, etc.) combines minimal text with luscious acrylic-on-canvas illustrations of blue and purple dotted, swished, or dabbed with contrasting pinks, whites, and greens. The child and dog are always depicted as black silhouettes that show surprising personality, as with the dog’s cocked ears; the silhouettes also help the book’s inclusivity, as there are no cues about race or sex (the child is short-haired and wears a simple shirt and pants). Although the artwork is the real draw here, the tale is also told charmingly, sweetly reassuring children that venturing into the world has rewards as well as uncertainties, and that “Home would always be there.” The story also works well as a bedtime book, preparing children for a journey into dreams. 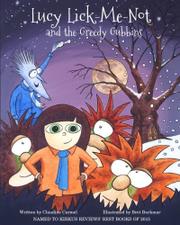 Lucy Lick-Me-Not and the Greedy Gubbins

Child heroine Lucy Lick-Me-Not is back, and this time, she’s taking on the seasons and the lack of a white Christmas.

It’s late December, and Lucy Lick-Me-Not is not happy. It’s too warm to be Christmas! There’s nary a snowflake in sight, her mother refuses to drink eggnog, and her father decides not to light a fire in the fireplace. What’s a kid to do? One day, Lucy Lick-Me-Not hears a voice coming from a tree. She is, of course, wary—she knows some monsters would love to gobble her up—but when she opens up the door to the tree, she finds Jack Frost. He explains that he’s been trapped in the tree by the Greedy Gubbin Queen, who won’t let him start winter. The queen instead wants her Gubbins to live and prosper. Using a lesson she learned in school, Lucy Lick-Me-Not fools the green-loving Gubbins and convinces them to head to Greenland, which, ice-covered as it is, isn’t all that green. This gives Jack Frost the opportunity he needs to chill down December, and a white Christmas is indeed had by all. Carmel (Lucy Lick-Me-Not and the Day Eaters: A Birthday Story, 2014) has done it again. The second installment of the series is just as wildly imaginative and fun as the first. Carmel has her formula—a frothy fantasy with a touch of smarts—down pat. Educational lessons dot the lyrical prose, as in the beginning of the book, when Carmel explains why there are seasons to begin with: i.e., the Earth’s rotation bringing different parts of the Earth closer to the sun and all that. Elsewhere, Carmel explains that spring is for planting, fall is for harvesting, etc. Burkmar’s vivid, colorful illustrations are the cherry on top of a lovely sundae that children and adults alike will reach for time and again.

A wild tale helmed by a charmingly clever kid. 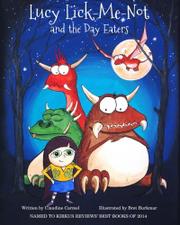 Lucy Lick-Me-Not and the Day Eaters

In this fanciful picture book, a birthday disappears and a little girl must get it back.

What if your favorite day just up and disappeared? What if that day was your birthday, never to be celebrated again? Such is Lucy’s dilemma. When she was younger, a frog shot her with a venom dart; thankfully, she was immune to the frog’s poison, but it turned her skin, well, poisonous. This proves to be perilous when the little girl begins to make friends. Soon, she becomes known as Lucy Lick-Me-Not (she’s lost a few kittens along the way). Like any child, Lucy loves her birthday—March 32nd—and she dreams of cake and presents. But it’s not to be: Lucy wakes up on her birthday to find not presents and balloons, but just any other day—her birthday has vanished. When she comes upon the Day Eaters—the grumpy, colorful monsters responsible for this calendar change—Lucy must think fast in order to get her birthday back. A little dark and plenty humorous, this gem of a picture book will appeal to both kids and grown-ups. Children will appreciate the vibrant illustrations and the heroine’s happy-go-lucky attitude, while adults reading along will chuckle at Lucy Lick-Me-Not’s weirder, darker origin. Carmel’s rhyming prose is frothy and funny—a feat, considering that Carmel is telling the absurd tale of a girl whose skin is poisonous. The rhyming couplets work well, driving the story along while still keeping things lighthearted. Illustrator Burkmar’s drawings are vivacious and alluring, perfectly aligning with the work’s irreverent vibe; the monsters etched on the page are indeed absurd but certainly not scary enough to frighten away younger readers. This work is the first in a planned Lucy Lick-Me-Not series, and future installments of Lucy’s story will assuredly be welcomed with open arms. Bad news for kittens.

A charming, wildly imaginative introduction to a brave new girl.