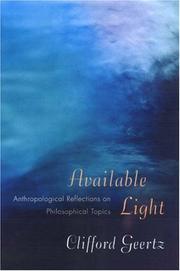 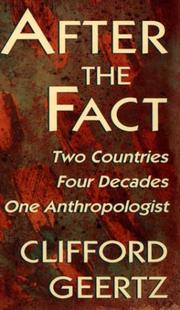 NON-FICTION
Released: Feb. 1, 1995
AFTER THE FACT: TWO COUNTRIES, FOUR DECADES, ONE ANTHROPOLOGIST
by Clifford Geertz
NON-FICTION
Released: Feb. 1, 1995
AFTER THE FACT: TWO COUNTRIES, FOUR DECADES, ONE ANTHROPOLOGIST
by Clifford Geertz
An unabashedly honest ethnography that faces head-on the challenge of representing the ``other'' in the social sciences' ``post-postmodernist'' climate of uncertainty. As the founder of ``symbolic'' anthropology, which he refers to as the ``anthropology of meaning,'' Geertz (Social Sciences/Institute for Advanced Study, Princeton) has already made an impressive contribution to the field. This book—a series of reflections on his fieldwork over a period of some 40 years in two locations: Pare, Indonesia, and Sefrou, Morocco—vibrantly demonstrates that ethnography which recognizes the internal complexities and conflicts of anthropology can still be a viable and worthwhile enterprise. Geertz admits from the beginning that the reason for weaving his narrative between these two cultures is that this was the manner in which he came to ``find his feet'' in them; it is his own life, rather than any natural contrast between the two cultures, that gives form to the narrative. The task Geertz sets himself is nearly impossible: Not only have the two towns changed in virtually infinite ways, but Geertz himself and the discipline of anthropology have also undergone enormous transformations; in addition, local history and politics are nested within regional and international ones. Geertz accepts the challenge of describing this metamorphosis in all of its complexity without resorting to graphs, statistics, and models of patriarchal lineages. The ethnography that emerges is part history, part anecdote, part personal narrative, and part theory. The author likens the process to ``Richard Wilbur's Tom Swift, putting dirigibles together, in the quiet weather, out in the backyard.'' Whether he is describing Morocco, Indonesia, Harvard, the University of Chicago, or Princeton, Geertz respects the difficulty of relating a past that remains elusive despite exhaustive field notes. Ironically, this lends his voice a kind of ``ethnographic authority'' that he would probably wish to avoid. At times unwieldy, cumbersome, self-absorbed, detached, and graceless—in short, quite brilliant. Read full book review >