David W. Duclon is a writer/producer/director with over 500 sitcom credits. He was mentored by Garry Marshall in 1970 as a staff writer on "The Odd Couple." He wrote and produced multiple episodes of "Happy Days" and "Laverne and Shirley." David partnered with Ron Leavitt and they Executive Produced the 1977 season of "Laverne and Shirley," then became show runners of "The Jeffersons" for four seasons. They co-developed "Silver Spoons", and ran the show for two years. then went their separate ways. David created and Exec Produced "Punky Brewster," followed by eight seasons as Exec Producer and show runner of "Family Matters."

"Once Upon A Christmas - Part One of the Unlikely Life of David Duncan" is his first comedy novel.

“A light bit of comfort reading for those looking for a fond, if sometimes-irreverent, look back at a bygone era.”
– Kirkus Reviews 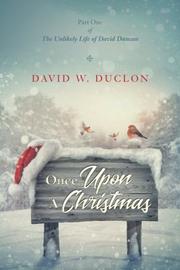 ONCE UPON A CHRISTMAS

It’s Christmastime in Rockford, Illinois, and 11-year-old David Duncan doesn’t have too much on his personal wish list: he wants a fancy new go-kart and the chance to go on a date with his crush, Susie Sweeney. There are a couple of complications, though: he can’t help but blurt out his feelings around Susie, and, more pressingly, she’s more into his best friend, Veto Santello. Meanwhile, his parents—the strict yet gregarious Duke and the kindhearted Phyllis—aren’t onboard with the go-kart idea. Add in a mischievous little sister and a principal with a predilection for corporal punishment, and there’s a lot for David to navigate. By his side is the family dog, Rags, who, when he’s not “jumpin’ and humpin’ ” someone’s leg, is loyal to a fault. The narrative follows David from misadventure to misadventure, whether they involve sophomoric pranks at school, an ill-advised sled trip down “Suicide Hill,” or a dramatic episode at the town’s outdoor skating rink. Duclon, a former executive producer for such TV sitcoms as Family Matters and the creator of Punky Brewster, hits familiar sitcom beats, always looking for the next joke while also showing nostalgia for the time period. He often contrasts moments of genuine Yuletide joy with the particularities of real life, such as a beautifully decorated Christmas tree repeatedly pulled down by a dog or a man in a Santa Claus suit sky-diving with a faulty parachute. Although the characters are somewhat archetypal—the wisecracking protagonist, the Everyman dad, the beautiful girl next door—Duclon puts them into inventive situations throughout, and the plot zips along, never lingering too long on one scene. This is just the first installment of a planned series, but the protagonist is still neatly and tidily developed over the course of the novel, becoming braver and more generous despite the many obstacles in his path. The fact that most of David’s obstacles are self-inflicted merely adds to the fun.

A light bit of comfort reading for those looking for a fond, if sometimes-irreverent, look back at a bygone era.