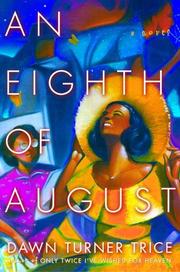 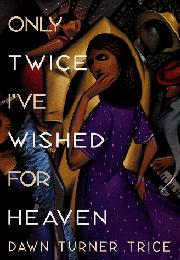 FICTION & LITERATURE
Released: Jan. 1, 1997
ONLY TWICE I'VE WISHED FOR HEAVEN
by Dawn Turner Trice
FICTION & LITERATURE
Released: Jan. 1, 1997
ONLY TWICE I'VE WISHED FOR HEAVEN
by Dawn Turner Trice
Chicago Tribune editor Trice brings a light touch of magical realism to this moving tale of violence, urban squalor, and upward mobility among the African-Americans who live in two distinct Chicago neighborhoods during the '70s. The only thing dividing swanky Lakeland from the blight of 35th Street is a fence covered with bushes. On the inside: beautiful apartment houses with model schools, a country club, and all the amenities of upper-middle-class life—a haven for ambitious blacks carved out of the urban landscape. Tempestt Saville, a redheaded 11-year-old, is suddenly dropped down in the sanctuary of Lakeland, where her hardworking father has accepted a job as a teacher. Sharing her mother's misgivings about the snobby inhabitants of this bourgeois retreat, Tempestt is drawn to life outside the gates and discovers a secret door to 35th Street, a decaying sprawl of rib joints, pool halls, saloons, and sidewalk preachers. There is, for instance, Alfred Mayes's ``New Saved'' congregation, a holy-rolling group who proselytize among the pimps, whores, and drunks. Miss Jonetta, who runs a drug- and food-store and tries to rescue lost girls, including ``Child'' (as she calls Tempestt), has a past of her own, having been recruited by Mayes as one of his prostitutes long ago. Nowadays, all the good and honest folk of the neighborhood hang out in her store. Tempestt, meanwhile, befriends Valerie Nicholae, a child of 35th Street who lives in Lakeland with her janitor brother (claiming to be her father). Such surprises are common in the mythically charged world limned by Trice—a world in which the day-to-day struggles of ordinary people assume heroic proportions. The magic is in the telling here, creating a fabulous novel that discovers transcendent possibilities on the mean streets of a city. Trice's greatest achievement may be how effortlessly (and modestly) she manages to mingle an original vision and real art. Read full book review >