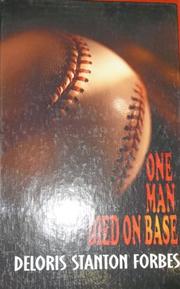 FICTION & LITERATURE
Released: Jan. 1, 2001
ONE MAN DIED ON BASE
by Deloris Forbes
FICTION & LITERATURE
Released: Jan. 1, 2001
ONE MAN DIED ON BASE
by Deloris Forbes
"Slow-paced even for baseball, these nine innings read more like an outline than a finished novel. Strictly for die-hard baseball fans feeling bereft in the long winter before spring training."
Zachary Amidon, aging centerfielder for the Centertown Comanches, is having trouble keeping his mind on the baseball game. Inning by inning, uncomfortable memories keep intruding. His career began, he remembers, to please his grandfather, who played semi-pro ball himself, and whose obsession was that his grandson would make it to the majors. Still in his teens, innocent and lonely, Zack was called to a farm club and returned home only twice afterward, for the funerals of his grandfather and his mother. As he moved up to better ball clubs, he attracted media attention, including an interview with Stewart Ashley for a cover story in Topic magazine. When Stewart's daughter, the nubile Lisa, made a pass at him, Zack married her despite her father's misgivings. Five years into the marriage, and six or so innings into the ballgame, Zack recalls how Lisa left him and he began an affair with a former hometown girl, now a beautiful model. More turns at bat, more chores in the outfield, more memories, and then the big at-bat, the last chance for Zack to be a hero, before the crushing moment when Lisa returns, Zack's problems explode into violence, and club owner Blair Kimball offers Zack a last attempt at redemption. Read full book review >