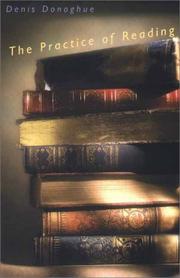 NONFICTION
Released: Oct. 1, 1998
THE PRACTICE OF READING
by Denis Donoghue
NONFICTION
Released: Oct. 1, 1998
THE PRACTICE OF READING
by Denis Donoghue
A prolific exegete ruminates on the practice of interpreting literature. New York University's Donoghue (Walter Pater, 1995; Warrenpoint, 1990; e tc.) refers to the practice simply as "reading," since any reading of a poem or story entails interpretive understanding. After an essay on his Irish origins, the next 7 of the book's 15 chapters somewhat haphazardly explore academic controversies of the last 30 years. They come a bit late in the day, mostly rehashing the controversies fomented in American universities by the theories of Jacques Derrida, Paul de Man, Stanley Fish, and a few others. Readers already familiar (or fed up) with the topic of literary deconstruction are likely to feel put upon by these unnecessary forays onto well-trampled turf. What saves the book, though, are Donoghue's, richly satisfying reflections on particular works. By now—this is his 23rd book—it is plain that Donoghue is one of our foremost practical critics writing in the tradition of people like T.S. Eliot and R.P. Blackmur. Interpretation is what Donoghue does best. In the second half he concentrates his attentions above all on the Irish, reading for us Swift's Gulliver's Travels, the "Nausicaa" chapter of Joyce's Ulysses, Yeats's poems "Leda and the Swan" and "Coole and Ballylee, 1931." He also offers essays on Macbeth and Othello, on Wordsworth's The Prelude, and on Walter Pater. But the outstanding "reading" that he offers, one which takes pride of place as the volume's concluding piece, deals with Cormac McCarthy's novel of 1985, Blood Meridian. McCarthy is a novelist more praised than understood. Donoghue's exemplary essay on him is certain to become a classic. Donoghue is an urbane reader and elegant stylist. His interpretations will challenge and even entertain serious readers of all stripes. Read full book review > 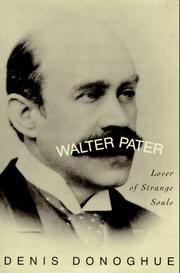 NONFICTION
Released: April 2, 1995
WALTER PATER: LOVER OF STRANGE SOULS
by Denis Donoghue
NONFICTION
Released: April 2, 1995
WALTER PATER: LOVER OF STRANGE SOULS
by Denis Donoghue
7943753.395 Donoghue, Denis WALTER PATER Elegant close readings of seminal modern aesthete Pater's passionate criticism coexist uneasily here with an oddly tentative biographical study of him. Donoghue (English/New York Univ.; The Old Moderns, 1994, etc.) sets out to trace how Pater invented a style that would become central to modern culture, by outlining the way in which he connected the modernisms of Wilde, Yeats, Joyce, and Eliot to antiquity, the Renaissance, and the Romantics. But in biographical sketches, Donoghue falls into some of the bad habits of the literary hagiographer. At times he seems unable to see the society for the eminent personages. (Symptomatic of this problem are several chapter titles that simply string together names— ``Hopkins, Oscar Browning, Simeon Solomon, Symonds.'') Nor does Donoghue entirely escape fetishizing things British and Victorian. The fierce intellectual battles over religion that captivated Pater's Oxford seem rather a lark; Donoghue's delicate treatment of the 'homoerotic disposition' common to Pater and his circle, while it avoids sensationalism, seems almost to take their age of closets and codes on its own terms. Those familiar with Donoghue's often polemical reviews may be struck by the lack of motivation these chapters exhibit. In contrast, his book's much stronger second half, where he surveys Pater's output and places it in perspective, finds Donoghue struggling—in the best sense of the word—with issues of aesthetics and politics. Rehabilitating Pater, the champion of art for art's sake, becomes, paradoxically, a means to rescue art and aesthetics from ``the rough strife of ideologues.'' Donoghue mixes it up admirably on Pater's behalf, turning weapons of cultural and even deconstructive criticism to the purpose of legitimating aestheticism as an alternative mode of consciousness. Readers will delight in Pater's worldview and in Donoghue's technique; the contradictions of the latter's project, meanwhile, may prove instructive to both readers and author. Read full book review > 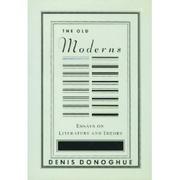 NONFICTION
Released: March 22, 1994
THE OLD MODERNS: ESSAYS ON LITERATURE AND THEORY
by Denis Donoghue
NONFICTION
Released: March 22, 1994
THE OLD MODERNS: ESSAYS ON LITERATURE AND THEORY
by Denis Donoghue
These 17 essays, all but two previously presented, display that urbane and personable voice, the supple and ranging intellect that has marked Donoghue's (English/NYU) twenty-some books on literature and literary theory and his frequent and insightful reviews in the NYRB. Modernism as a literary style, Donoghue establishes in ``The Man in the Crowd,'' required an urban culture, the individual creative mind confronting the anonymous ``other,'' the dread it provokes, the validation of individual feeling, and the internalization of images and events. He explores the subtleties, distinctions, and controversies of modernism in the essays that follow, from ``Beyond Culture'' and ``The Political Turn in Criticism'' as well as studies of individual authors: James, Yeats, Eliot, Joyce, and Stevens. The literature, Donoghue emphasizes, is more important than the criticism, and he laments the breakdown of the relationship between them, the substitution of contexts, themes, and theories for aesthetic and fictive truth in literary studies. ``Criticism's recourse to psychology, politics, anthropology, philosophy, and linguistics is rarely seen for the desperate device it is,'' he observes in his appreciative reading of R.P. Blackmur, concluding that such diversions leave most literature ``in every sense of the word that matters, unread.'' Donoghue is a master stylist. With subjects ranging from Henry James to Derrida, his essays capture a tone of informed conversation, with tactical quotes, rich allusions, and strategic questions (``What, then, does it mean?'')—and without the fragmentation, jargon, and obfuscation of contemporary literary discussion. Read full book review >