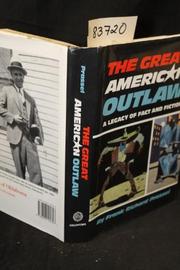 BIOGRAPHY & MEMOIR
Released: Sept. 1, 1993
THE GREAT AMERICAN OUTLAW: A LEGACY OF FACT AND FICTION
by Frank Richard Prassel
BIOGRAPHY & MEMOIR
Released: Sept. 1, 1993
THE GREAT AMERICAN OUTLAW: A LEGACY OF FACT AND FICTION
by Frank Richard Prassel
An engaging and anecdotal exploration by Prassel (Criminal Justice/Univ. of Arkansas; The Western Peace Officer, 1992—not reviewed) of the background, history, legends, social contexts, and representations of the outlaw, from Robin Hood to Thelma and Louise. Fugitives declared by the courts as outside the protection of the law, their rights and property forfeited, their lives endangered, outlaws are a curious combination of victim and villain, violence and innocence, independence and depravity—a symbol of resistance to society's injustices and a major threat to society. From England's highwaymen, pirates, and witches to America's cattle rustlers, train robbers, and gangsters, Prassel juxtaposes the miserable, lonely, hunted, brutal, and dangerous real lives of outlaws with the idealizations that have appeared in folk ballads (he offers a collection), novels, films (as in the very first narrative film, 1903's The Great Train Robbery), and on radio and TV. His outlaws include Captain Kidd and Billy the Kid, Dillinger and E.T., Sawney Beane (the prototype of Sweeney Todd) and Patty Hearst, Daniel Boone and Manuel Noriega—an odd assortment, admittedly subjective, primarily Anglo-Saxon and Hispanic, and violating the orderly classification with which he started. Some of Prassel's examples require an imaginative stretch- -the chapter on women, for instance, starts predictably with English pirates and prostitutes but moves on to film stars, the femme fatale, the sexual temptress originated by Theda Bara and consummated in Kathleen Turner. Underlying themes include the contrapuntal relationship between the law and the outlaw, the contributions of law enforcement to crime, and the odd alliance between criminals and show business. An excellent introduction that raises such major questions as why creative artists are so fascinated by outlaws and why crime permeates popular culture in a relatively peaceful society. (Twenty-three illustrations) Read full book review >