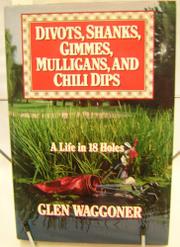 NON-FICTION
Released: April 1, 1993
DIVOTS, SHANKS, GIMMES, MULLIGANS, AND CHILI DIPS: A LIFE IN EIGHTEEN HOLES
by Glen Waggoner
NON-FICTION
Released: April 1, 1993
DIVOTS, SHANKS, GIMMES, MULLIGANS, AND CHILI DIPS: A LIFE IN EIGHTEEN HOLES
by Glen Waggoner
A lighthearted, breezy look at two very different games of golf: the one that's played by the pros on PGA tours, and ``the Hacker's Game'' that's played by almost everyone else. Sportswriter Waggoner (Rotisserie League Baseball, 1987, etc.- -not reviewed) was rebitten by the golf bug (he'd thrown his clubs into a pond in 1962) while on the Rotisserie League's annual trip to Florida for spring training—but he admits to more ability as observer and reporter than as player. Here, his profiles of Arnold Palmer, Jack Nicklaus, and Mark Calcavecchia are admiring but also refreshingly frank—pointing out, for example, that Nicklaus, for all his glory and popularity, isn't much liked by his fellow pros and is often called ``Karnak...because he always has an answer even before there's a question.'' An emotion-laden chapter on Tom Kite, who almost became ``The Best Golfer in History Never to Win a Major'' until his thrilling victory in the 1992 US Open, becomes a tribute to a ``nice guy...the soul of self-discipline, the heart of devotion to his craft.'' Waggoner draws an interesting portrait of the typical pro: 35 years old, 5'11'', married, 1.4 kids, ``born in California, North Carolina or Texas but lives in Florida,'' winner of 3.5 tournaments, earning $303,000 per year and voting Republican ``if he votes at all.'' For the ``hackers,'' Waggoner offers tips on how to watch a golf tournament; on ``Club-Throwing Technique 101: Grip, Proper Alignment, Plant and Release''; and on how to select golf clubs and ``golf stuff'' such as the Golfer's Toilet Seat and specially designed golfer's undershorts. More enlightening are his descriptions of three days spent with Jim Flick, ``the best golf teacher in the world,'' and of a course in zen golf he took at the Omega Institute. Brings a fresh sense of fun to otherwise well-trod fairways. Read full book review >