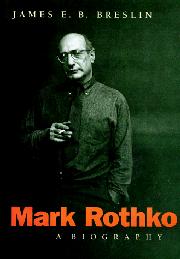 NONFICTION
Released: Nov. 1, 1993
MARK ROTHKO: A BIOGRAPHY
by James E.B. Breslin
NONFICTION
Released: Nov. 1, 1993
MARK ROTHKO: A BIOGRAPHY
by James E.B. Breslin
The full-bodied fruit of seven years' labor—a zealous, uncommonly kind portrait of one of Abstract Expressionism's irascible masters—from Breslin (William Carlos Williams, 1970). Marcus Rothkowitz, born in 1903 in the Russian city of Dvinsk, emigrated with his family in 1913 to Portland, Oregon. Rebellious as a youth, he dropped out of Yale after a taste of refined Eastern anti-Semitism, turning instead to Manhattan and the painter's life. Impoverished, Rothko lived in a series of cold-water flats and run- down neighborhoods during the Depression and WW II, often confronting the city's museum establishment, which then had eyes only for European art. The painter's first wife's money demands—as well as the success of her jewelry business, which turned him at times into her salesman—resulted in divorce; but with remarriage in 1945 to the young, adoring Mell, Rothko came to be seen as one of a distinctly American group of artists. In the late 1940's, he embraced the abstract luminous colors and rectangular forms that became his trademark, and, in the hands of aggressive dealers, he went rapidly from rags to riches. Still defiant, he returned, after two years' work, a commission to paint panels for the celebrated Four Seasons restaurant when he realized that his efforts could be only decorative. Other commissions followed, but Rothko's colors darkened as his health and marriage deteriorated. In 1970, in despair and pressured by his dealer to sell more paintings, he committed suicide. Providing an expansive view of Rothko and his milieu, and rich in information about the New York art scene—but a breathless enthusiasm for his subject leads Breslin to descriptive excess, especially with regard to individual paintings. (Color & b&w illustrations) Read full book review >