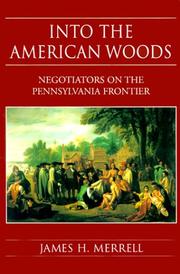 BIOGRAPHY & MEMOIR
Released: Jan. 1, 1999
INTO THE AMERICAN WOODS: NEGOTIATORS ON THE PENNSYLVANIA FRONTIER
by James H. Merrell
BIOGRAPHY & MEMOIR
Released: Jan. 1, 1999
INTO THE AMERICAN WOODS: NEGOTIATORS ON THE PENNSYLVANIA FRONTIER
by James H. Merrell
A pathbreaking scholarly work, by one of the nation's leading historians of the interaction between Native Americans and European newcomers in early America. In this deeply researched book, Bancroft Prize—winning historian Merrell (The Indians' New World, not reviewed) unearths the lives of the go-betweens—translators, diplomats, traders, and others—who for a time linked the disparate peoples of colonial America into a network of functioning relationships. This volume is also an extended essay on the meaning and significance of woodlands and wilderness to New World natives and colonists. With Pennsylvania as its focus, the book traces the lives and activities of people of whom many historians will never have heard—of transcultural Indians (such as Shekallamy) and colonists (such as Conrad Weiser) who had "unmatched ability to negotiate the frontier's cultural terrain." That terrain was a forested borderland of language, trade, religion, settlement, and treaty-making. And its go-betweening inhabitants, whom Merrell brilliantly brings to life, faced not just formidable obstacles of culture but the more tangible ones of food, travel, lodging, and safety as they tried to create comity between people of vastly different ways and thought. But cultural borders were never to be fully crossed, nor peace easily secured. Whatever these dedicated go-betweens might attempt, armed skirmishes, then war, eventually came to the colony by the 1760s, and no go-betweens could save the natives from the resulting disaster. Never before has this generally well-known story been told this way—as a history of identity, acculturation, nature, and words. Anthropologists, ethnographers, even naturalists and linguists, as well as historians, will welcome and mine the book for years. Written in language as robust as a monograph will allow, the book is a stunning achievement. (30 illustrations, not seen) Read full book review >