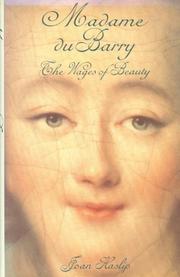 BIOGRAPHY & MEMOIR
Released: April 1, 1992
MADAME DU BARRY: THE WAGES OF BEAUTY
by Joan Haslip
BIOGRAPHY & MEMOIR
Released: April 1, 1992
MADAME DU BARRY: THE WAGES OF BEAUTY
by Joan Haslip
In this brief romantic biography of the last mistress of Louis XV, Haslip (Marie Antoinette, 1988, etc.), now 80, brings a special charm to the story of du Barry (1743-93), whose legendary beauty brought both rewards and penalties: power, wealth, envy, fear, and, ultimately, death. Illegitimate child of a French peasant, Jeanne Beáu was educated in a convent until, at 15, she emerged a golden-haired, lisping beauty who worked as a hairdresser and a milliner's assistant—but who was, in fact, a prostitute. Discovered by Jean du Barry, a dissolute gambler and pimp to the aristocracy, she was introduced at Versailles, where Louis XV, 58, a widower, became infatuated with her. After her hasty and unconsummated marriage to Jean's brother, Guillaume, comte du Barry, Mme. du Barry became the king's official mistress and one of the wealthiest women in France, a wealth she shared with, among others, her beloved ``niece,'' Betsi, whom Haslip ``suspects'' may have been her illegitimate daughter. Mme. du Barry was also hated, especially by Marie Antoinette, who arranged to have her imprisoned after the death of Louis. Released after one year, Mme. du Barry recovered her jewels, her estate, and a series of lovers, including an English neighbor who ultimately rejected her—a ``little-known'' story that Haslip reveals. In the early stages of the Revolution, Mme. du Barry traveled often to England, possibly as a courier for ÇmigrÇs but ostensibly to try to recover stolen jewels that had been impounded there. She returned to France only to be beheaded for her aristocratic associations. Although more extensive, scholarly, and even popular biographies of du Barry are available, this one has a particular appreciation for the decorative arts that women like du Barry cultivated—arts that included the remaking of themselves—and for the hazards of beauty when it comes close to political power. The lavish language recalls the style of Regency novels, for which this could serve as a reference. (Eight pages of b&w photographs—not seen.) Read full book review >