John Nobit is the pseudonym for a teacher at a small university in the southern United States. He steadily climbed through the academic ranks recently reaching the rank of Full Professor despite the cries of outrage from some of his colleagues. Noteworthy accomplishments include membership on an NASA mission science team and completion of an FEMA Hazard Mitigation plan. This plan covers hundreds of miles of the Texas-Mexico border. He worked to train Texas Military Force personnel in the use of geo-spatial technology to support disaster response. Collapse World: Recovery is his first attempt to enter the world of literature. 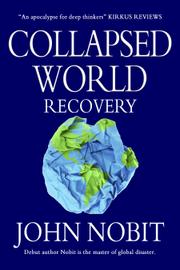 BY John Nobit • POSTED ON

This post-apocalyptic debut chronicles the life of John Robertson as he and his allies try to prevent the Dark Ages’ return.

In 2018, on the night of the Super Bowl, civilization changes irrevocably. News outlets report that a genetically engineered biological weapon has begun spreading throughout the Russian Federation, with a nearly 100 percent mortality rate. Soon, air travel is suspended, and nations attempt to secure their borders. Within a few hours of the outbreak, a million people have died. After the president of the U.S. declares martial law, John Robertson, a geographic database manager for a Texas petroleum company, watches the country spiral into chaos. By the time the virus hits the States, it has mutated, allowing one in 10 victims to survive. John lives, while his friends do not. This harsh new world (which lacks government structure, not to mention the Internet) calls for a mission, so John decides to combat the fires plaguing the brushlands of Texas. Eventually, he joins the Texas Military Forces, who embrace his ethos of “saving the savable.” As the years pass, the New Texas Republic proves the most resilient portion of post-collapse North America. But stability brings with it the return of politics and disputes over how to improve the future. Debut author Nobit, in his cool, collected narrative, hopes to fix the world with ideas and compassion rather than Mad Max–style action. Some major problems facing humanity include maintaining food production and manufacturing centers and taming newly barbaric and unorganized territories. In this light, “Machine tools, and those who could run them, became worth their weight in pre-collapse gold.” When John founds the Institute for Security and Justice—an NGO determined to help stabilize areas around Texas—the winning complexity of Nobit’s world ratchets upward. The dirty Sen. Stetson, an isolationist working against John throughout their careers, is central to one of many well-threaded subplots. The tale’s foremost hiccup is that its hero frequently shows “all the emotions of a rock.”  Readers won’t mind much, because grand ideas (like environmentalism and monetary reform) pick up John’s slack.

An apocalypse for deep thinkers.