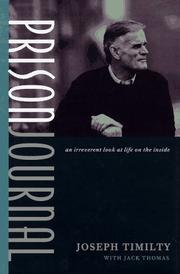 BIOGRAPHY & MEMOIR
Released: July 25, 1997
PRISON JOURNAL: AN IRREVERENT LOOK AT LIFE ON THE INSIDE
by Joseph F. Timilty, Jack Thomas
BIOGRAPHY & MEMOIR
Released: July 25, 1997
PRISON JOURNAL: AN IRREVERENT LOOK AT LIFE ON THE INSIDE
by Joseph F. Timilty, Jack Thomas
A one-time Boston politico tries his hand at muckraking from inside prison—and fails laughably. Timilty, who ran unsuccessfully against Kevin White for the mayorship of Boston in 1975, starts off his prison memoir by protesting his innocence: He was sent up the river, he maintains, for refusing to rat on his friends and associates, not for merely having been involved in a real-estate financing deal in which shady mortgage-fixing and a major drug dealer figured. He was not quite Charles Keating, that much is certain. Neither did he pay major penance: Timilty's memoir, penned with Boston Globe feature writer Thomas, records his whopping 120 days in a federal medium-security prison in the Blue Ridge of Pennsylvania, where his major complaints were insensitive guards and chaplains, cold weather, and the quality of the food. Not that the food was bad. Quite the reverse. It was, Timilty writes, ``great, all you can eat.'' Lasagna, French toast, sausages, chicken, the horrifying list of artery hardeners goes on, and Timilty returns to it again and again while remarking that senior citizens and poor people were starving on the outside. (``This is punishment? Most Americans don't eat this well. Maybe it's a trick. Maybe they know that if they feed us a steady diet this rich in starch, it will kill us.'') In this comparative country club, Timilty labored away at wondering what to do with all his free time until he undertook to redevelop the prison latrines, painting bathrooms with an unwilling crew of fellow cons, and establishing no-reading rules (to improve, so to speak, the flow of traffic). Timilty's protestations in this indifferently written journal add up to an unconvincing whine that will likely interest only members of his immediate family, and perhaps to a few reformers interested in overhauling the diet inside the big house. Call it Soulless on Ice. (illustrations) Read full book review >