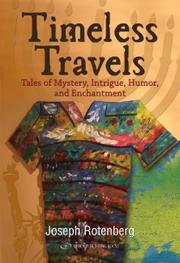 BY Joseph Rotenberg • POSTED ON

An eclectic assortment of essays and stories—both fiction and nonfiction—delivers a kaleidoscopic exploration of the Jewish experience.

Debut author Rotenberg begins this sundry group of pieces by examining the maggid, a peripatetic preacher and raconteur who regaled Jewish immigrants with tales that strengthened their sense of religious heritage. The author self-consciously emulates the maggid, producing more than five dozen stories gathered thematically into six groups. Some of the tales are autobiographical and related in the first person; in one the author discusses his first trip to Israel in 1967 and the historic opportunity for peace presented to the Middle East following the Six-Day War. Sometimes the stories are about family: the author details how his father—as a 26-year-old private in the Belgian army in 1940—made his way from France to the United States by way of Morocco and Portugal. Many of them are whimsically comedic—Rotenberg provides a cheeky look at Jewish dating and the board games popular during Jewish celebrations. The chapters are rarely overtly political and never partisan—one story recounts the participation of Iranian Jews in the shah’s nuclear program in the 1950s but avoids any judgment on U.S. diplomatic efforts to curb those aspirations today. While the collection is artistically diverse, the recurrent theme is the dual preservation and adaptability of Judaism across time and geography. For example, Part IV consists of an eight-chapter memoir about a boy’s early school days on New York’s Lower East Side in the 1950s and ’60s that illustrates how the iconic neighborhood provided unusual opportunities for both cultural assimilation and religious isolation.  Rotenberg is a gifted storyteller who shifts seamlessly from fiction to nonfiction, drama to comedy. In addition, given the unspeakable hardships endured by Jews in the 20th century, his relentless optimism is astonishingly refreshing: “American Jews of my generation have been truly blessed by having the opportunity to visit and live in a united Israel and, more particularly, a united Jerusalem, for much of our lifetimes.” With buoyant lightheartedness, his stories exemplify a kind of middle ground between Zionist separatism and modern assimilation by identifying cultural elasticity as a signature characteristic of Jewishness. These lessons are never imparted didactically—Rotenberg’s rhetorical gift is to teach without sententiously sermonizing. But however endearing the author’s cheerfulness is, some readers might wish that he explicitly confronted the grim existential challenges to worldwide Jewry more often. For example, in “Homolka Hesitates,” Thomas Homolka, a gifted baker in Prague, is so tortured by his failure to save some Jewish customers from abuse at the hands of German occupiers that he bakes poison into a cake served at an official Nazi dinner and kills himself. Heartbreaking stories like these challenge the possibility of “bending, without breaking” that Rotenberg repeatedly, and artfully, describes. Nevertheless, his announced focus is the American-Jewish experience in particular, and he captures this with all the rigor of an anthropologist and the vivacity of a poet.