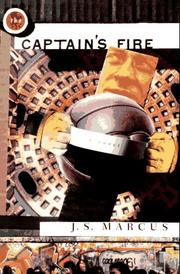 FICTION & LITERATURE
Released: Feb. 1, 1996
THE CAPTAIN'S FIRE
by J.S. Marcus
FICTION & LITERATURE
Released: Feb. 1, 1996
THE CAPTAIN'S FIRE
by J.S. Marcus
A long, bleak tale of the disillusionment of a young American Jewish bisexual in East Berlin after the collapse of the wall, from the talented author of the story collection The Art of Cartography (1991). Like many other smart, young, and restless Westerners, Joel LaVine has gone to East Berlin to teach English, drawn by the excitement, opportunity, and ``desire to be at home somewhere else.'' But Joel is a mess of contradictions: American yet Italian- looking, tall and chubby yet effeminate, Jewish yet a-religious, libidinous yet impotent. And after his initial excitement and curiosity wear off, he's sucked into the confusing mire of a city (and country and continent) under dramatic change. While we follow Joel's slothlike decline, the novel is really about the mess that is post-wall Berlin. In the anarchy, Marcus aptly describes the hatred between Easterners and Westerners, the subtle and not-so- subtle layers of racism, xenophobia and paranoia that grip the Germans. Marcus has a sharp eye for self-parody and offers many a twisted, erudite take on common East Berlin scenes—a cafe scene becomes ``Brueghel figures drinking beer in a De Chirico cityscape.'' Yet he paints with a broad brush that covers all Germans while rarely developing his few fictional characters. Joel rarely interacts with others, and when he does, the reader hears about it secondhand. There's also not much story beyond the increasing torpor of a confused Joel and several short, separate vignettes that are passed off as his fantasies but that read like short stories not yet fleshed out. Marcus, who himself lived in Berlin for four years, from 1990 to '94, has much interesting material; unfortunately, he never pulls it together into fiction. Intelligent, darkly funny, yet much like East Berlin itself- -chaotic, disconcerting, and incomplete. Read full book review >