Saffron really wants to go to Paris. The plan is to work at her parents' drive-in restaurant and save her tips. But who is that arriving with the carnival that set up out back? Clair is a strange girl, fourteen but so much wiser. And why doesn't Clair's mother come out? Mrs. Imbeault, the short order cook is in the back, sizzling up some burgers on the grill, carrying the cold chickens to their berth in the chicken rotisserie machine, with the big amber light on top. Mrs. Imbeault keeps making sure that light works. What is going on at Robi's Flying Saucer Drive-In?

Robi's Flying Saucer Drive~In is the first in a series about four girls in Antoninio, and their teacher, Mr. Clifford who has knowledge of the stars. Saffron goes to an all-girls high school and Sister Maris Stella keeps an eye on her for her mother. How is she to be free?

At night, at Robi's Flying Saucer Drive-In, Carmen the waitress tells Saffron about modeling in Paris, for Yves St. Laurent. Carmen was the 'bride' at the end of the show, the most honored position. A fire starts to burn in Saffron's stomach. She must get to Paris. But what about Clair? How is Clair going to get home?

Kelly Anne Winsa worked in film and television in Toronto as a clothing designer. She wrote the short comedy 'Hi Honey' which won several awards in 2012, including People's Choice Golden Honu at the Big Island Film Festival, and Critic's Choice at the Blue Water Film Festival in Michigan. Kelly currently writes in Hawaii and Toronto and plans a move part-time to France to discover more about the Eiffel Tower and France in general. 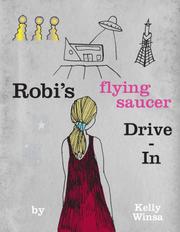 In this YA sci-fi debut novel, 14-year-old Saffron befriends a classmate who turns out to be far from home indeed.

When Saffron’s parents buy a fast-food restaurant called Robi’s Flying Saucer Drive-In, she’s excited to tackle her first job and save all the tips she can for the ninth-grade class trip to Paris—that is, if her parents ever agree to let her go. Saffron likes the work and her co-workers: Pakistani ex-model Carmen, potato-peeling delinquent Ronnie, kindly Mrs. Imbeault, the French cook, “one of those people that makes you think the world is really all right.” At her all-girls Roman Catholic school, Saffron enjoys art class and astronomy, both of which she takes with new girl Clair Villeneuve. Clair is a white-blonde, her skin practically translucent, and she initially claims to be from Frankfurt, Germany, saying her mother works for the traveling carnival set up on the outskirts of town, by the nickel refinery. But when the carnival leaves suddenly, Clair remains behind, and Saffron’s family takes her in. That’s when Saffron learns that Clair is no teenage girl but a centuries-old alien who harbors a dream that involves Earth. Mrs. Imbeault also isn’t what she seems—and both women may be in danger. While the reader expects Clair’s extraterrestrial narrative to shape the book, Winsa spends equal time on true-to-life but less compelling topics: Saffron’s family dynamics, her name (“I had the blockbuster name Saffron that did not suit me at all. My mother had named me after a spice”), the tomato harvest in her hometown of Antoninio, her plan to visit Paris, her classwork (she decides that astronomy is her favorite subject: “The universe is the last frontier”). The author’s prose is solid, but the subject matter jumps around within paragraphs, shifting in tense and time. A pivotal plot point involving Clair and her ambitions takes place in Saffron’s absence, and Winsa makes an odd choice for the tale’s ending.

A muddled sci-fi tale of fast food, aliens, and friendship.

The Elegance of the Hedgehog

'Important decisions are made by those who are invisible, by the humble people.'