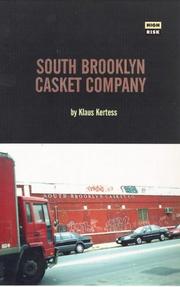 FICTION & LITERATURE
Released: June 1, 1997
SOUTH BROOKLYN CASKET COMPANY
by Klaus Kertess
FICTION & LITERATURE
Released: June 1, 1997
SOUTH BROOKLYN CASKET COMPANY
by Klaus Kertess
Art critic and curator Kertess (the nonfiction Desire by Numbers, etc., not reviewed) collects nine stories, six that first appeared in the New York art mag Bomb. Mostly about homosexual desire, narcissism, and the fear of physical decay, these self- conscious tales devolve into a glib and precious aestheticism, with loads of arcane floral detail. Like many of these erotically charged pieces, the long ``Saving Salvador'' takes place in the pre-AIDS world of gay promiscuity. Two friends from prep school—one an American aesthete, the other from El Salvador—argue over the fate of this Central American country. Peter, ``the sardonic wallflower,'' indifferent to all politics, rejects his wealthy friend Manolo's request to write about his country's decline. What Peter doesn't realize right away is that another Latin he has had a torrid affair with is in fact Manolo's older brother, who has abandoned his birthright for the revolutionary cause. Politics figure in another longish piece, ``Black Rainbow,'' in which an American writer reluctantly joins a strange theatrical production in Berlin, where style matters more than any ideas. The most metafictional piece (and the most enjoyable) is just what its title says: ``Footnotes,'' pages of citations to an unprinted libretto that apparently involves the Olympics, flute playing, Greek wrestling, Hart Crane, space exploration, and the Stations of the Cross. More explicit erotica includes the title piece, which splices sauna-room sexplay with memories of an awful visit from a disapproving mother. Strangest of all is ``Storm Warnings,'' which suggests that the fecal stink of the homeless is really ``a kind of avant-garde,'' that bad odors counter sexual repression. Memories of beautiful boys and international sexcapades make up the dialogue of ``Desire by Numbers,'' while ``Popeye's Demise'' chronicles the painful memories of childhood—an absent father, first guilty gropings, and a domineering German grandmother. The arty purple prose threatens to overtake even the best stories—honest reflections on sexual identity—here. Read full book review >