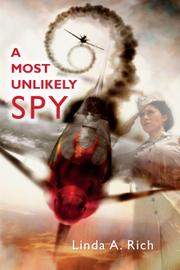 A MOST UNLIKELY SPY

In Rich’s debut historical thriller, a World War II codebreaker tracks down an American naval officer who may be working as a spy for the Japanese.

Edith “Eddy” Richards, having recently completed graduate school, celebrates her freedom in December 1941 with a trip to Hawaii. Unfortunately, she gets there just in time to witness the Japanese attack on Pearl Harbor. Eddy’s degree in linguistics makes her a prime candidate to become a military cryptologist and help intercept and break Japanese naval codes. She starts work decoding messages at Pearl Harbor, but she quickly distrusts her colleague Lt. John Smith, who’s taken a liking to her friend Mary. When Mary disappears and later turns up dead, Eddy checks Mary’s personal code book and finds “Smith” as the final entry, all but confirming the officer’s guilt. As the war continues, Eddy’s job takes her to Washington, D.C., and other cases, but she refuses to give up on proving that the elusive Smith is a murderer and enemy spy. Eventually, she meets Alice, the Eurasian daughter of a Japanese industrialist, whom she befriends during her search for Smith. Alice also plays a significant part in the main plot, and her ethnic background fits into the story’s understated theme of racial turbulence in the United States following the Pearl Harbor attack. (For example, a number of Japanese-Americans, such as Alice herself, are placed in internment camps.) The author skillfully incorporates real-world events into her novel, including the 1923 Great Kanto earthquake and the 1931 Massie Trial in Honolulu. Rich provides a solid foundation for Eddy’s character, and her engaging first-person perspective dominates the narrative. The novel packs a lot of story in relatively few pages, and sometimes skims the finer details. This is mostly beneficial, however, as when the author downplays Eddy’s relationship with a man named David, whom she meets on the way to Hawaii; in this case, it keeps the happily independent woman largely free of romantic obligations. But a subplot in which Eddy takes part in apprehending a “notorious female spy” known as “the Doll Woman” doesn’t pick up much steam, and pales in comparison to the Smith-related storyline. The novel’s title, in the end, is curiously ambiguous, as it could apply to several characters.

A concise thriller with an enthralling protagonist and a rich historical backdrop.