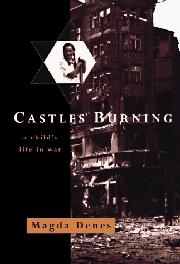 BIOGRAPHY & MEMOIR
Released: Jan. 1, 1997
CASTLES BURNING: A CHILD'S LIFE IN WAR
by Magda Denes
BIOGRAPHY & MEMOIR
Released: Jan. 1, 1997
CASTLES BURNING: A CHILD'S LIFE IN WAR
by Magda Denes
The wise, heartbreaking, and very human account of a childhood interrupted. Denes (In Necessity and Sorrow, 1976), a professor in psychoanalysis and psychotherapy at Adelphi University, was five years old in 1939 when her father, a newspaper editor and publisher, fled Hungary for the safety of New York City. As he did everything, Gyula Denes fled in style: first-class and with an entirely new wardrobe of 12 suits and 45 shirts. That, in order to do so, he was forced to throw his young family, who remained behind, on the mercy of their relations did not seem to bother him overmuch. Nor did he contact them or send them help in the following years. At first the Deneses were merely poor, but as the war progressed they became persecuted and finally hunted, hiding under floorboards, in cellars, and even in the vilest bathrooms (so vile that their enemies did not want to search there) in order to survive. Denes's elder brother and hero, Ivan, was killed in the final days of the war while acting as a courier for the Zionist resistance group Hashomer. The Russian ``saviors'' who liberated the family's town sent her 14-year-old cousin Ervin behind German lines to tell the enemy to surrender; he never returned. Denes survived, along with her mother, aunt, and grandmother, largely because of her resourcefulness and innate intelligence; what died in the war was her innocence. Finally the family obtained visas for Cuba. When their ship stopped briefly in New York City, Denes met her father, who told her she was not a very pleasant child. ``I know,'' she replied. ``Starving for prolonged periods of time while simultaneously being fed on by packs of lice tends to corrode one's pleasanter side.'' Denes was 12 years old. Wry and tragic, her story brings the horrifying realities of wartime to vivid life. Read full book review >