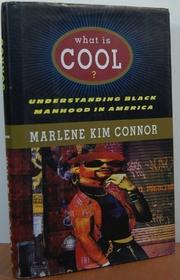 HISTORY
Released: May 1, 1995
WHAT IS COOL?: UNDERSTANDING BLACK MANHOOD IN AMERICA
by Marlene Kim Connor
HISTORY
Released: May 1, 1995
WHAT IS COOL?: UNDERSTANDING BLACK MANHOOD IN AMERICA
by Marlene Kim Connor
A heated essay on the art of cool and what it means to African-Americans. First-time author Connor correctly points out that, for black people, being cool—i.e., projecting a chilly aura of unflappable self-assurance, often tinged with a hint of menace—has always been a coping mechanism, rather than merely the adopted style many whites perceive it to be. She provocatively contends that the roots of cool can be traced back to slavery, when blacks learned to remain impassive as their fellow captives were beaten, raped, and abused. Dividing her treatise into five sections (``Street Cool,'' ``Revolutionary Cool,'' ``Middle-Class Cool,'' ``Electronic Cool,'' and ``Women and Cool''), the author sheds a great deal of light on the reasons why cool is more important than religion to many young black men. Somewhat predictably, she spends a lot of time bemoaning the increase in gunplay, drug use, and amorality among inner-city youth, noting that ``cool on the streets today has become cold, and terrifying.'' The roles played by television in disseminating images of cool, of rap music in representing cool, and the educational system in shaping young black men's psyches are all examined, as are the differences between northern and southern cool. Malcolm X is the epitome of cool according to Connor, while Martin Luther King, professing nonviolence and faith, is not uncool but simply ``outside of cool.'' While the author displays an intuitive grasp of her subject, she tends to jump from one insight to another, plowing forward as though she were writing on a caffeine jag. It makes for vigorous prose that could use a bit more polishing in spots. Occasionally messy, but charged with a visionary current that sends thought-provoking shock waves shooting from the pages. (Author tour) Read full book review >