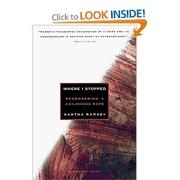 NON-FICTION
Released: Jan. 3, 1996
WHERE I STOPPED: REMEMBERING RAPE AT THIRTEEN
by Martha Ramsey
NON-FICTION
Released: Jan. 3, 1996
WHERE I STOPPED: REMEMBERING RAPE AT THIRTEEN
by Martha Ramsey
A memoir stunning in its unflinching directness and in the precision and deftness of the rememberer's descriptive voice. Ramsey, now an award-winning poet (Blood Stories, not reviewed), was raped when she was 13 years old. She heartbreakingly evokes the day it happened—how sexy she felt riding her bike, wearing her favorite red dress, which fit just right, how she imagined someone looking at her and admiring her as she rode past, and how grown-up she had felt riding alone to visit her teacher, who lived far away. She does not shrink from the rape itself either; she describes it, and her later rememberings of it, with careful exactness and simplicity. She thoughtfully chronicles the rape's effect on her adult sexual and emotional life, including her struggle to write about it. The parts of the book that deal with her family may be the most wrenching. Both of her parents were alcoholics—a situation Ramsey describes with painful specificity, without taking refuge in the clichÇs of contemporary recovery jargon. She considers how her parents were unable to help her at the time, unable to comfort and protect her, and reflects on her anger and on the possibility that rape made her isolation from them inevitable. With a depth that is rare in stories of childhood sexual trauma, Ramsey explores the girl she was before the attack, what her life was like, and how that life affected her experience of rape—as well as the ways rape irrevocably changed it. Ramsey interviews others who remember her trauma, including her drunk and aging father, who has flashes of touching lucidity; these memories fascinatingly complicate Ramsey's own assumptions about the past. Rejecting the lost innocent, the victim, the heroic survivor, and other tired archetypes, Ramsey tells her story in her own way, with subtle, shattering power. Read full book review >