Michael Lesy is the author of Wisconsin Death Trip, Angel's World: The New York Photographs of Angelo Rizzuto and Long Time Coming: A Photographic Portrait of America, 1935-1943, among others. A professor of literary journalism at Hampshire College, he li 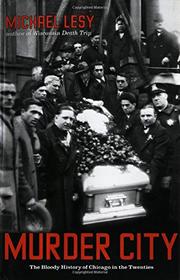 Released: Jan. 18, 1990
RESCUES: THE LIVES OF HEROES
by
Released: Jan. 18, 1990
RESCUES: THE LIVES OF HEROES
by
From death to life: Lesy, who in 1987 wrote an excellent account of his travels in search of men who deal with death (The Forbidden Zone), now writes—though not quite as forcefully—of his travels in search of men and women who grant the gift of life. As earlier, Lesy couches his aim—here, to understand what motivates "heroes" to "risk their own lives to save others"—in personal terms. As a child, he reports, the question nagged him "morning and night," and perhaps crystallized when, as a teenager, he himself was rescued by two passers-by from a severe beating ("I felt grateful, but, also, I was baffled. . .I decided to inquire why some people stopped others from being killed"). To do so, he spent time with several heroes, some lauded, some not, each biographed and interviewed at length here. Among the best known are Curtis Sliwa, founder of the Guardian Angels; Ed Roberts, polio victim and leading spokesman for the disabled; and two Korean War veterans who won the Congressional Medal of Honor. Among the unsung are the devoted parents of an autistic child, and southern black Hollis Watkins, a fearless activist for voters' rights. It isn't saintliness, Lesy discovers, that empowered these heroes; one of the veterans has spent his life trying to forget his heroism, which consisted of rescuing wounded Marines who participated in an assault he refused to lead, while Ed Roberts, Lesy finds, is a pompous bully, "a wreck of a human being who bragged for the same reason a man who could barely swim thrashed his arms." So what prompts heroism? Lesy's answer: "heroism is a conjunction of opposites"—that is, while "an act of self-sacrifice. . .it is also an act of self-reclamation. The hero rescues his own self as he rescues another." A compelling, sincere, and inspirational intellectual quest—but not quite convincing in its conclusions, which smack of oversimplification and which disregard the evidence for "pure" altruism, discussed by Alfie Kohn in The Brighter Side of Human Nature (p. 484). Read full book review >