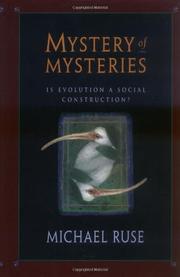 NON-FICTION
Released: April 1, 1999
MYSTERY OF MYSTERIES: IS EVOLUTION A SOCIAL CONSTRUCTION?
by Michael Ruse
NON-FICTION
Released: April 1, 1999
MYSTERY OF MYSTERIES: IS EVOLUTION A SOCIAL CONSTRUCTION?
by Michael Ruse
Ruse (Philosophy and Zoology/Univ. of Guelf, Canada) poses a trendy question: Is evolution (indeed, is all science) a social construct, i.e., relative, subjective? Is it steeped in cultural values? If nothing else, readers are treated to lively profiles that pair the work and thoughts of Erasmus and Charles Darwin; Julian Huxley and Theodosius Dobzhansky; Stephen Jay Gould and Richard Dawkins; Richard Lewontin and Edward O. Wilson, and finally, the English sociobiologist Geoffrey Parker and the American Jack Sepkoski. Ruse weighs the contributions of each scientist on the scale of Popper (is there a belief in an objective real world out there that the science is approaching through hypotheses which are falsifiable?) vs. Kuhn (is the scientist engaged in science that is part of the group consensus, or is there a paradigm shift?). In parsing the work, Ruse comments on "epistemic" values—is the work coherent, consistent, with predictive validity, is it fertile in opening up new questions to research? Or is it nonepistemic—are there cultural (e.g., political, psychosocial) factors at work? Lest there be any angst, rest assured that Ruse concludes that there is objectivity in science—but there are also cultural factors at work; for instance, scientists may be religious or atheists. On the whole, Ruse emerges as a progressionist, in the sense that science has become more sophisticated, adhering to stricter rules of logic and evidence and eschewing speculations except in popular articles. All the same, one cannot avoid seeing selectivity and bias in Ruse himself: He is particularly hard on Gould. Lewontin, on the other hand, is given worshipful treatment in spite of his well-known use of Marxist dialectics even in his theoretical writing. And is there a bit of the white Western male fraternity in perpetuity here? Perhaps. In the end, Ruse's conclusions are sound enough. But expect some of his methods to be questioned and some of his subjects begging to differ. (12 photos, 18 line illustrations) Read full book review >