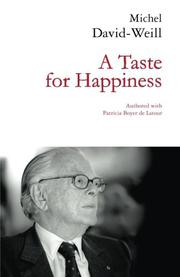 BIOGRAPHY & MEMOIR
Released: April 23, 2015
Reviewed: Oct. 29, 2015
A TASTE FOR HAPPINESS
by Michel David-Weill
BIOGRAPHY & MEMOIR
Released: April 23, 2015
A TASTE FOR HAPPINESS
by Michel David-Weill
A ruminative memoir of an eclectic life lived happily.
As its title suggests, the recurrent theme of David-Weill's debut is happiness, which he describes as a mysterious dispensation—more a "gift" than a skill or act of will. He dwells on his eccentric life in a panoramic gathering of remembrances. He was born in France in 1932 and spent part of his childhood burdened by the fear and destruction of World War II. The conflict forced him and his family out of France and eventually led to the death of his beloved brother. The author later became a very successful investment banker and a devoted art collector, splitting his time between Paris and New York City. His love of art permeates the book, and he writes rhapsodically about the enchanting power it has over him; he often digresses at some length on the virtues of Titian, Caravaggio, and Diego Velázquez, among other artistic giants. In general, he presents his account of his life somewhat haphazardly, briskly leaping from reportage to philosophical meditation. He expounds upon a broad range of topics: his love of women, the French understanding of money, his cultural Jewishness and the state of Israel, his once ardent Catholic faith and his loss of it, and his professional life, to name only a small, representative sampling. Surprisingly, although he discusses his boyhood family in considerable detail, he's less forthcoming about his family as an adult—an unusual omission for a personal memoir driven by the theme of happiness. Also, the memoir tends toward hyperbolic pronouncements ("No one in the world probably has better homes than I do"). That said, it's often charmingly written and filled with meditative gems: "As far as sex is concerned, it is undoubtedly the greatest, most passionate pleasure in life, partly because you can never really entirely understand the other person." Although this is a deeply personal account of a confessedly idiosyncratic life, David-Weill's cultural commentary will make this book a delight for readers who aren't all that interested in the biographical details.
A thoughtful recollection for philosophically minded readers. Read full book review >