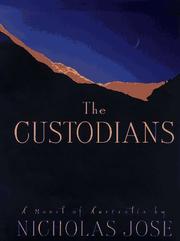 FICTION & LITERATURE
Released: Jan. 12, 1998
THE CUSTODIANS
by Nicholas Jose
FICTION & LITERATURE
Released: Jan. 12, 1998
THE CUSTODIANS
by Nicholas Jose
Lives intersect too neatly in this intellectually provocative latest from storywriter and novelist Jose (The Rose Crossing, 1996, etc.)—a tale that's as much about a group of friends as their native Australia. These several friends meet as children in the 1950s while observing a solar eclipse from their school playground. Included are: intellectually curious Alex; deeply religious Josie, from the wrong side of the tracks; Jane, who loves to draw; Elspeth, the heiress to an old fortune; venturesome Ziggy, the son of Lithuanian immigrants; Wendy, the beautiful daughter of pious parents; and part-Aboriginal Cleve, stolen by welfare officials from his Aborigine mother and given to a white family who wanted a son. Together, all of them make an ideally representative group to illustrate Jose's ideas about Australian history, domestic and foreign policy, and a future threatened by Asian expansion. While much of this is not without interest, it does lay a heavy burden on the characters, whose lives often have to answer more to punditry than passion. The story follows these custodians of Australia, who, like their country, can never escape the past, as they move through childhood, college, and into adulthood. Jane becomes a noted artist; Ziggy, an actor who stars on the London stage; Wendy fatally takes up with a handsome drug dealer; Josie becomes a nun until an affair with Cleve sends her home; Cleve becomes an Aboriginal activist; Elspeth discovers meaning in farming her family's vast land holdings; and Alex, a rising but emotionally detached political star, finds happiness with Josie, to whom he's been attracted since childhood. They all meet 40 years later at Elspeth's homestead to witness the handing over of a sacred Aboriginal site, and, as the moon goes into an eclipse, their friendship is affirmed, old hurts are forgiven, and new loves consummated. Lively and original characters in vivid settings are held hostage to history and a didactic plot. Still, Jose does offer an illuminating take on contemporary Australia. Read full book review >

FICTION & LITERATURE
Released: June 1, 1996
THE ROSE CROSSING
by Nicholas Jose
FICTION & LITERATURE
Released: June 1, 1996
THE ROSE CROSSING
by Nicholas Jose
A fable, set in the 17th century, filled with vivid evocations of another time, wonderfully peculiar characters, and driven by a rather chilly vision of fate. Jose (Avenue of Eternal Peace, 1991) has an ingenious idea. Edward Popple, a British scientist scornful of his foppish colleagues and uncomfortable in Puritan England, takes a berth as ship's doctor on an expedition to see the Indian Ocean. His daughter Rosamund, a young woman frustrated by the stifling conventions of her class and time, becomes a stowaway on her father's ship. Then a mutiny leads to their abandonment on a small but overwhelmingly fertile island in the East, their only companions birds and sea turtles. Popple falls to the study of his new world with zest, while Rosamund samples her newfound independence, roaming the island, indulging in romantic fantasies. The only unsettling element is Popple's increasingly incestuous interest in his daughter. Their fraying idyll is ended, though, by the arrival of a Chinese junk, carrying an elderly eunuch, an advisor to the just-deposed Ming dynasty of China, and the last male heir to the Ming line, an indolent and seemingly impotent young man. Popple and Lou Lo, the eunuch, carry on lengthy debates in Latin. Meanwhile, Taizao, the heir, finds himself attracted to blond, zestful Rosamund, and after some truly peculiar foreplay, the two consummate their affair. For much of the novel, Jose's dense knowledge of 17th-century science and political theory, of horticulture and of the period's somber religious beliefs, drives the book along, gives it conviction and startling vigor. But the story turns increasingly grim; by the close, a series of nasty plots and betrayals feel as if they've been forced onto the narrative rather than drawn from it. Jose's evocation of his island, and of the conflicting worldviews of two utterly different civilizations in collision, is rich, often witty, and startling. He fumbles only in imposing too abrupt and mechanical an end on his odd, engaging characters. Read full book review >