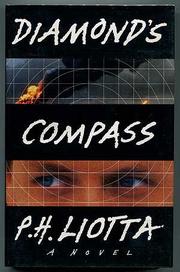 FICTION & LITERATURE
Released: April 1, 1993
DIAMOND'S COMPASS
by P.H. Liotta
FICTION & LITERATURE
Released: April 1, 1993
DIAMOND'S COMPASS
by P.H. Liotta
A sensitive Air Force cadet arrives on a visit to his parents in Tehran on the eve of the Shah's fall, unaware of the tapestry of coming-of-age experiences that awaits him. The time before Dante Diamond's landing in Tehran is filled with reminiscences of his term at ``the Zoo,'' the Air Force Academy, where one best friend, Mitchell James III, cracked under the pressure to follow in his family's military tradition, and another, Scott Hind, concealed beneath his commanding swagger the prophetic certainty that he would die on April 24, 1980. But even after Dante catches up with his parents—doting Beatrice and gung-ho Brigadier General Thierren Boyd (T-Boy) Diamond—his narrative, and his elliptical letters to his wife Faith, who never appears, are filled with recursive snapshots of his childhood, his Air Force training, and his brief affair with his flight commander Troy Daniels—all pointed toward his recognition of an uncanny affinity he finds within himself for Persian culture. Ghossemi Nehlad, the driver who saved the General from assassination, appreciates and fosters this affinity in ways that are hard to read, eventually matching Dante, a passionate mountain-climber, with a Kurdish sherpa named Asadollah, who may well be an agent of the Shah's secret police bent on sabotaging the planned climb of Kooh Dam†vand, Iran's highest mountain. Even the harrowing ascent of Dam†vand, however, is shrouded in a mystical reverie that the novel's historical conclusion intensifies still further. An endnote acknowledges that this first novel life as a long poem, and it shows: Liotta's gestures toward melodrama have the effect of providing grist for, or even simply interrupting, the meditations on Iran as seen from a strenuously Western point of view. Read full book review >

Released: April 30, 1989
LEARNING TO FLY: A SEASON WITH THE PEREGRINE FALCON
by
Released: April 30, 1989
LEARNING TO FLY: A SEASON WITH THE PEREGRINE FALCON
by
". . .and with his master," the subtitle should read, for this lyrical, wide-ranging work covers the flights of men as often as those of birds, with Liotta intertwining two tales—one of his vocation as an Air Force pilot, the other of his avocation as an avid falconer. Liotta's story pivots around a summer he spent as a graduate student working for the Peregrine Fund on an eight-week project in the Adirondacks, reintroducing raptorial birds to their natural home. During this stretch he read Chaucer, befriended squirrels, rode out an Olympian thunderstorm, and discovered a craving for solitude that links him with the falcon, "exceptional, solitary, and unlike any other species." Leaping back and forth in time (the chronology is sometimes hard to sort out), the author cuts to memories of other raptorial birds, especially Aragorn, his ferocious pet at the Air Force Academy. He passes on startling falcon lore—they can spot a mouse from a mile and a half away—along with horrifying tales of airplane crashes that speak obscurely of a dangerous and tenuous relationship between wingless humans and the aerie heights. He's at his best comparing falcons to jets (the organic flying machine seems infinitely superior) or pondering the appeal of these "emotionless" birds whose "very being is meant to destroy." Finally, birds, planes, wilderness coalesce into a somewhat gooey spiritual insight: "Eternity means nothing if its awe is not surviving in the here or now—the now/here of nowhere." Less cohesive, but more unusual and daring than Dan O'Brien's The Rites of August (1988), which also focuses on the release of peregrine fledglings into the wild. A promising debut. Read full book review >