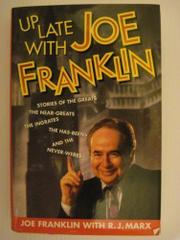 BIOGRAPHY & MEMOIR
Released: Feb. 1, 1995
UP LATE WITH JOE FRANKLIN
by Joe Franklin, R.J. Marx
BIOGRAPHY & MEMOIR
Released: Feb. 1, 1995
UP LATE WITH JOE FRANKLIN
by Joe Franklin, R.J. Marx
The TV and radio talk-show host talks and talks about his four decades in show biz. Franklin's fans may be reassured to know that his memoirs are as quirky and campy as any of his media tours down Memory Lane. Vaudeville may be a bit under the weather, but for this ultimate fan, it never died. He knew them all and loved them all: Walter Winchell, Eddie Cantor, Jimmy Durante, Billy Rose, Rudy Vallee, Kate Smith—and they were big! ``Cliff Edwards was a big, big Broadway star.'' Eddie Fisher was ``gigantic.'' So was Johnny Ray. Veronica Lake threw herself at him; so did Marilyn Monroe. There are goofy anecdotes (``George Burns, when he got tired of his toupees, would send them to Georgie Jessel''), and whether they are true or false makes little difference. Fragmentary sentences, excited repetition, derailed trains of thought and Borscht Belt sentimentality make the tummler's syntax sound, on paper, much like Franklin in the flesh...or at least like Billy Crystal in Franklin's guise. With fey bashfulness, the author describes the culmination of ``the biological urge'' as doing ``some hinky- dinky'' or making ``poom-poom.'' Strippers in the old days, he says, ``would never show their dingle.'' He's a Damon Runyon character, in love only with show business and his part in it. Never one to succumb to the sin of false modesty, Franklin's favorite performer seems to be Joe Franklin. Always spritzing, always on, he is amazed at his own career: ``I'm the icon of the aeon in this kind of scenario...It's supercataclysmic.'' Franklin demands to be remembered with the insistence of Hamlet's father's ghost, providing unremitting nostalgia and unrelenting theatrics. The old Nabob of Nostalgia natters on, rapid-fire, giving no quarter until, wading through this rodomontade, readers are eventually submerged in a sea of schmaltz. (16 pages b&w photos, not seen) Read full book review >