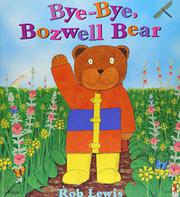 ANIMALS
Released: March 15, 2003
BYE-BYE BOZWELL BEAR
by Rob Lewis, illustrated by Rob Lewis
ANIMALS
Released: March 15, 2003
BYE-BYE BOZWELL BEAR
by Rob Lewis, illustrated by Rob Lewis
After teasing his sister, messing up the kitchen, making a fuss over lunch, and turning his music up too loud, Bozwell Bear is fed up with being told off by his over-demanding family. The natural course of action after such injustice is to head for the hills where life is certain to be easier . . . or is it? In this British import, Lewis (Friends, not reviewed, etc.) has created a sympathetic and charming, but not overly cuddly character who learns first hand that life away from home isn't all it's cracked up to be. First, it gets a little chilly out in the wilderness. Seemingly supportive, Mum wisely suggests that Bozwell wear a hat as well as a coat to keep warm and then, later, take along a drink as well as a piece of cake to stave off hunger. Each trip home to retrieve necessary supplies (books and games, tent and sleeping bag, etc.) is followed by a slightly longer repetitive journey further from home, "through the woods, across the bridge, over the rocks, under the fallen log and then up a steep hill." This tale is reminiscent of other "runaway" stories, with a protagonist methodically planning a trip to fairer shores, only to later realize there's no place like home. The colorful illustrations are simple yet effective as the reader sees the frustration, pride, and sadness on Bozwell's face as he experiences the highs and lows of such a journey. Also amusing are the subtly placed insect antics in the background. (Picture book. 3-5)Read full book review >