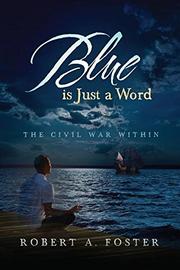 Blue Is Just A Word

This debut memoir gives readers two tragic deaths and a running rumination on Lincoln, the Civil War, slavery, and the author’s career as a musician.

The book opens with the funeral of Judi, Foster’s wife, leaving him with a 2-year-old daughter, Anna. Nine months before, Foster’s younger brother Dave also died of cancer after horrible suffering. Both Judi and Dave are described as almost too good, too saintly, for this earth; Foster was beyond devastated. Then the work backtracks to childhoods; the courtship of Judi; memories of Dave, his soul mate; and Foster’s success as a rock musician in the Boston area and England during the early days of the genre. He was blessed with a solid upbringing. His mother was musically inclined and also a history teacher who taught her three sons true history—the evil of slavery, for example—as against those who would distort or subvert it. This became the bedrock of Foster’s thinking (in his view, the Civil War was not about states’ rights) and, today, he is a highly respected amateur Civil War historian. Slavery remains a recurring theme, not just the institution that shamed the country in Lincoln’s time, but slavery as any addiction (Judi’s father was a hopeless alcoholic) or whatever rules and binds individuals, as Judi’s and Dave’s cancers did. Slavery is all around people and inside them, which is the basic message of the work, and the author is fervent about fighting it in all its manifestations. In fact, Foster is one of the most passionate writers readers will likely find between the two covers of a book, and it is important to emphasize that this is not feigned, that somehow the audience will know that this is not an act. But it must be added that passion, the need to tell all, to wrestle one’s demons and narrative absolutely to the ground, can be an embarrassment of riches. But for aficionados of Lincoln and the Civil War or especially the early rock scene, this should be a rich feast. There is also a helpful bibliography.

An odd, but affecting book that blends history, autobiography, and rock.