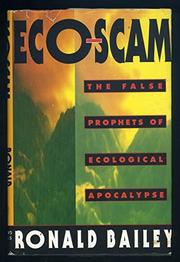 NON-FICTION
Released: Feb. 1, 1993
ECOSCAM: THE FALSE PROPHETS OF ECOLOGICAL DOOM
by Ronald Bailey
NON-FICTION
Released: Feb. 1, 1993
ECOSCAM: THE FALSE PROPHETS OF ECOLOGICAL DOOM
by Ronald Bailey
The rest of the book is like the title. In page after page, Bailey (a former Forbes science writer who now produces TechnoPolitics, a PBS weekly program) blasts away at the ``eco- apocalypts'' and ``millenarians''—principally Paul Ehrlich, Lester Brown, Carl Sagan, and all who espouse a ``limits to growth'' philosophy. All of Bailey's targets are tarred with the brush of being leftist egalitarians, eager to redistribute wealth: Malthusians, technophobes, and neo-Luddites with romantic notions of ``appropriate'' technologies and Rousseauian ideals. All are condemned for being wrong, wrong, wrong in their doomsday scenarios. Why? Because the doomsdays didn't happen. No thermonuclear war, so no nuclear winter. No population explosion and standing-room-only world. No major famines and starvation. No major pollution. The ozone hole? Trivial. The greenhouse effect? Another nonissue. The prophets were wrong, Bailey avers, because they didn't understand how clever and common-sensical humanity is, moving ever upward in growth, progress, and technology. It's in the best interests of industry to recover wastes; people will naturally limit their family size as their lot improves. Let government interference subside, free markets reign, and laissez faire carry the day. But apart from noting that not all ecologists are alike, savvy readers should observe that there's nary a word here about the population growth in Muslim Asia and in parts of Africa; the cesspool that Mexico City has become; the horrors of sub-Saharan Africa; the pollution in East Europe; the worldwide AIDS epidemic; or the widening rift between rich and poor. Nowhere is it noted that without scientists speaking out, there probably would be no laws to curb pollution, no unleaded gasoline, no movement toward recycling and conservation, no outcry against destruction of habitats and species. The only chapter here that most readers may sympathize with inveighs against Jeremy Rifkin, the ultimate antibiotech neo- Luddite. Otherwise, a suitable tract for libertarians. Read full book review >