Edit my Pro Profile
Publish my Pro profile
Books by S. A. Nicola 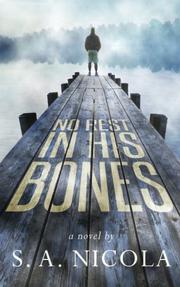 FICTION & LITERATURE
Released: June 24, 2014
Reviewed: July 29, 2014
NO REST IN HIS BONES
by S. A. Nicola
FICTION & LITERATURE
Released: June 24, 2014
NO REST IN HIS BONES
by S. A. Nicola
A guilt-haunted man examines what he sees as his role in a terrible crime committed by his wife.
"When did you know your wife was a sociopath?" asks the first line of this novel. Michael Sanders, recently promoted to director of financial aid for a Chicago-area university, and his wife, Liz, are ready to start a family, but at 35, Liz is finding it difficult to become pregnant—and she reacts pathologically. Michael already carries an enormous burden of guilt for in some way contributing to Liz's parents' deaths (just how is revealed late in the book), and as a result, he feels responsible for making sure Liz gets everything she wants: "I spent the last ten years foolishly covering up my own devastating mistake and nurturing dysfunction in my wife….Even though I didn't commit the crime with my own hands, I am truly just as guilty as Liz." Although Nicola (The Lives of Skeletons, 2012, etc.) casts Michael's core problem as one of turning away from God, the real problem—shared by both Michael and Liz—is their dearth of emotional intelligence. For this, Nicola provides abundant and well-delineated evidence of secrets and lies. Liz pretends to have forgiven the drunk driver who killed her parents, but she's lying; Michael knows that Liz's father was no saint, "but Liz didn't need to know that"; Michael is upset that Liz doesn't ask him about his own feelings about infertility, but he doesn't tell her; Michael keeps financial troubles from Liz, and Liz painstakingly fakes a pregnancy. Though the truths come out, even at the end, Michael calls Liz "a monster of my own creation," which goes beyond taking responsibility for his own actions, as if Liz is incapable of agency. He's still treating her as too weak-minded to have made her own decisions. Some readers may appreciate this view of husbandly responsibility; many will be turned off. Nicola does skillfully build suspense, however, taking readers through Liz's crazy logic step by step and showing just how an otherwise sane woman could make her choices. Liz's self-righteousness is chilling and well-observed.
Clearly shows the toxic thinking in a bad relationship, but not all readers will be satisfied with the resolution. Read full book review >