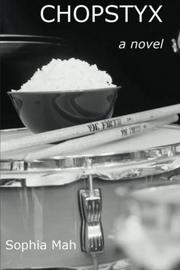 In Mah’s debut, an insecure woman in her late-30s wants to find her life’s passion and prove her traditional Chinese family wrong, so she starts a rock ’n’ roll cover band.

Unsure of her place in her family and in the world, Jessica “Jessie” Chou is seeking answers. She feels like the black sheep of her family: Her sister, Clyde, is a successful lawyer, married to a billionaire with two children. Everyone loves Clyde, but Jessica has always felt left out; she purposely tries to disconnect herself from Clyde’s perfection. Despite having a young daughter, Chloe, who adores her, and a longtime live-in fiancé, Vincent, Jessica is still unhappy and unfulfilled, due in part to her prolonged unemployment. It doesn’t help that she lives only feet away from her parents’ Northern California home, in their guesthouse, which further proves to her pushy, overbearing father that she isn’t doing enough to reach her potential. Constantly telling her to find a sensible career, he still chides her for dropping out of a pre-med program to major in English. Even though Jessica is nearing 40, she can’t shake her meddling, strict, conservative family; the hopelessness gnaws at her. Mah writes from Jessica’s perspective in an effortless, distinct voice that drives the novel and fits well with the fun, fast-paced style and tone. Desperate to be successful and admired like Clyde, Jessica forms an all-girl, Asian-American rock band with her best friend, Katie. After putting the word out and holding auditions, Chopstyx is born. Their impressive sound propels them forward, but Jessica soon discovers that being in a band isn’t as easy as she thought. Yet Jessica’s persistence—at the expense of spending time with Vincent and Chloe—gets the band their first paying gig. She constantly wants more, though, so she and a band mate begin writing their own songs in the hope of entering a battle-of-the-bands contest. Occasional typos aside, the story brings to life its vivid, believable characters, each with genuine quirks and depth. They’ll undoubtedly draw readers into the world of amateur rock ’n’ rollers on the road to stardom.