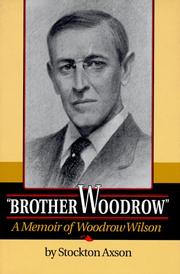 BIOGRAPHY & MEMOIR
Released: Sept. 1, 1993
'BROTHER WOODROW': A MEMOIR OF WOODROW WILSON
by Stockton Axson
BIOGRAPHY & MEMOIR
Released: Sept. 1, 1993
'BROTHER WOODROW': A MEMOIR OF WOODROW WILSON
by Stockton Axson
Personal memoir of Woodrow Wilson by his brother-in-law, edited by Link (American History/Princeton). Axson (younger brother of Wilson's wife-to-be, Ellen) met the future President in 1884, when Axson was still a youth, unsure of himself but thoughtful and observant—for instance, in his portrait of his sister, who emerges here as gifted and selfless (she gave up art and learned German in order to assist Wilson in his research), absolutely committed to the success of her husband and privy to all his secrets. As an adult, Axson taught English literature at Princeton and experienced Wilson's magnetism, power, tenacity, and emerging political gifts when Wilson, as Princeton's president, proposed to refocus the elite school as a democratic institution. Axson details the hive of rumors, dirty tricks, and moneyed manipulation that ensued as students, faculty, and trustees split over the vast reforms Wilson proposed (``They are fighting me on the basis of their privilege, and privilege never yields,'' he quotes Wilson as saying). Axson presents the paradox at the center of Wilson very clearly—the sense of incorruptible virtue fused with a tough, undoubting use of available tools and power. The author was privy to fewer firsthand observations during the presidency, these touched upon here mostly in terms of Wilson's opinions of this man or that (we learn, for example, that Wilson didn't take Teddy Roosevelt very seriously). Revealing of the idealism, energy, and talents—as well as of the preoccupied and cold personality—that carried Wilson to a dominant presidency. (Thirty halftones—not seen) Read full book review >