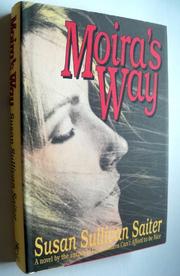 FICTION & LITERATURE
Released: Sept. 1, 1993
MOIRA'S WAY
by Susan Sullivan Saiter
FICTION & LITERATURE
Released: Sept. 1, 1993
MOIRA'S WAY
by Susan Sullivan Saiter
A promising premise—tracking a bright girl's rebellion against her pinched, alcoholic South Dakota family—degenerates into a long set-piece populated by stereotypes and suffused with tacky adolescent sex. At first it appears that Moira McPherson—in her early teens, intellectually gifted, big-breasted, and reeking of sex—will never grow up. That's because throughout the novel's first 225 pages the author finds it necessary to catalogue every sexual thought, look, and encounter that Moira undergoes. And they are plentiful: From her ne'er-do-well drunken father's evident lust for Moira to her adulterous mother's nasty cracks about Moira's breasts, which kids and adults alike are always staring at, to a series of river's-edge encounters with greasy high-school boys and sadistic teachers, Moira is usually thinking about or having secret sex. This is her one release from a grim, emotionally crippled, occasionally violent family life that includes a younger ``good'' sister named Taryn, who blames Moira for everything that's wrong with their family. Then, at 16, Moira comes home from her first real ``date'' (no sex) and her father, drunk, aims a rifle at the boy she's with but shoots and kills himself instead. For the final 150 pages, Moira, oddly unaffected by her father's suicide, rapidly experiences the 60's at Columbia, the 70's in med school and Vista, and the 80's in a Chicago penthouse happily married to her college sweetheart, a rich Jewish political activist named Zeke. Meanwhile, back in South Dakota, Taryn undergoes a series of nervous breakdowns, and Moira's mother prospers in a pinched, unpleasant way, glad to be rid of both her drunken husband and her annoyingly sexy daughter Moira. Second-novelist Saiter (Cheerleaders Can't Afford to Be Nice, 1990) offers some vivid, compelling insights into life as the scapegoated child of an alcoholic family. Beyond that, much steamy bathos and nobody much to like. (First printing of 40,000) Read full book review >