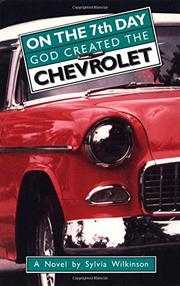 FICTION & LITERATURE
Released: Sept. 26, 1993
ON THE 7TH DAY, GOD CREATED THE CHEVROLET
by Sylvia Wilkinson
FICTION & LITERATURE
Released: Sept. 26, 1993
ON THE 7TH DAY, GOD CREATED THE CHEVROLET
by Sylvia Wilkinson
The world of stock-car racing in the South, as experienced by two brothers, is the subject of Wilkinson's sixth novel (Bone of my Bones, 1982, etc.). The author is also a timer for race teams and has compiled an oral history of stock-car racing (Dirt Tracks to Glory, 1983—not reviewed). Tom and Zack Pate are farmer's sons in 1950's North Carolina. Tom is a natural behind the wheel—a ``speed demon'' whose only goal in life is to be a successful race-driver. Success means not only honing his skills but ``good crew, good car, good sponsor.'' Alienated from his old man Hershel, Tom sneaks away from the farm while still in his teens, headed for Greenmont, ``a little kingdom of dirt track racing.'' Women swoon over Tom's good looks, but he has no more feeling for them than for his family, seeing them as threats to his career; twice he will abandon pregnant girlfriends. Meanwhile, kid brother Zack has none of Tom's looks or talent, but he has a generous spirit; being Tom's sidekick is fulfillment enough. He tracks Tom down to Greenmont and goes to work at the same auto-repair shop, alongside boss Ned, evil-tempered Arnold, dumb Cy, and browbeaten Richard, the one black mechanic. The group's conversations mirror the complaints, excitements, and superstitions of a closed world (``Can't have no woman hanging around a race car. Bad luck'') and add texture to a hodge-podge of a novel that lacks a narrative spine. The races and accidents that form Tom's odyssey are spliced with scenes from the family farm, while Wilkinson perversely passes up opportunities (Zack's homecoming, Tom's hauling bootleg liquor, the racist treatment of a black driver) to give her material a dramatic edge. The last word in authenticity, but not an involving read. Read full book review >