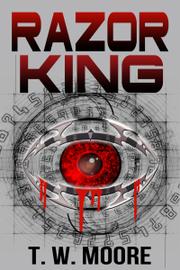 A security-force captain tries to stop a man leading a resistance against quantum-computer systems that threaten the entire world in Moore’s (I Love Today, 2007) sci-fi tale.

In the late 21st century, the United States works with Russia to prevent future civil and global wars by creating powerful, atomic quantum computers. The two systems, named MYKRONS and INFINTOR, function in collaboration with a worldwide surveillance system, UNICOM, and the newly formed World Control Government. The computers accumulate so much information that they’re able to control government council members like puppets through blackmail and extortion. INFINTOR enlists a human, Capt. Matagon, to head Battle Born, an anti-terrorist unit, while the mysterious Dr. Ozso Rukur leads the Underground, who oppose the computers. Matagon’s relentless search for the Underground’s hideout gets significantly amped up when Rukur’s muscle, a man called Razor King, abducts LiTilla, an amnesiac woman whose background check turns up nothing. Matagon soon realizes the Underground’s operation is far more advanced than he thought, and Rukur’s plan to take down the UNICOM system entails more than simply defeating the computers. The author loads his story with stellar sci-fi tidbits, including artificially enhanced humans called “genetics,” typically used for hard labor, who make perfect cronies for the villains. His characters also face plenty of danger; Matagon, for example, faces off against some of the stronger genetics. LiTilla turns out to be more than merely a hostage, and Moore makes MYKRONS, the more aggressive computer, come across as more sinister by giving it a humanlike attribute: an animated smile. He also makes Rukur sympathetic at times; after all, he is leading a fight against world-dominating machines. Copious new details come to light later in the novel, but Moore’s writing is so meticulous that a lengthy, final-act discussion of what Rukur’s been up to is largely unnecessary.

A sci-fi novel swarming with detail that genre fans will appreciate and savor.