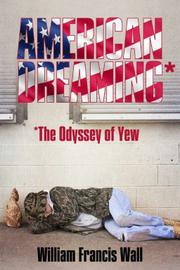 Ulysses Endymion Wynn—known to most as Yew—is a young man doing his best in a difficult world. As a diligent worker and part-time grad student, he encompasses all the toil and moral cement of a striving working-class hero. When a series of circumstances beyond his control sends him on a kooky adventure around the world, Yew sees firsthand the evil reach of the powers that be. From an “ultraright” president who cares for nothing so much as the approval of FOXY News to a businessman with more money and ex-wives than he can count, innocent Yew discovers time and again that people—particularly wealthy, right-wing people—don’t care about much more than themselves. Nothing is holy for characters with names like Dud Drover and Miss Fortuna Sultana Dow-Jones. Even for fans of over-the-top satire, the message can grow tiresome, particularly when the message is presented with overdone alliteration and lengthy sentences. For example, when Yew meets the aforementioned businessman: “ ‘The name’s Maximus Inminimis Mountebank Barnum Randall, Yew, although, to those who know the fiscal ropes and how to unknot them, I'm known as ‘the Wizard of Wall Street,’ ‘the Kingmaker of K Street,’ ‘the American-Dream Determiner,’ and ‘the Midas-touch Maximizer,’ but simply call me ‘Max,’ ’ Max said magniloquently and then he stuck out a manicured hand and which Yew then shook hesitantly as Max showed off the infectious showman’s smile that he had polished via years of palaverously selling ideas and goods that buyers hadn’t thought that they could be sold on.” As typical complaints about big business and the politicians who love it are rehashed, not much new ground seems to be covered. Yew’s adventure may excite some readers who enjoy their right-wing caricatures writ large, although Yew himself doesn’t garner all that much interest. Unlike Joseph Heller’s Yossarin, who found himself in an equally cartoonish and frightening world, Yew is so squeaky clean and unchangeable that he wins little sympathy. Throughout his adventure, he merely finds more reasons why his initial worldview was correct. Politically, Yew may be the polar opposite of Rush Limbaugh, but his experience of the world appears to be just as self-confirming. Readers looking for a complex, nuanced look at world problems might look elsewhere.

Packed with more potshots at the political right than an Air America highlight reel; readers fond of alliteration and interested in a fairly straightforward satire will find much to enjoy.