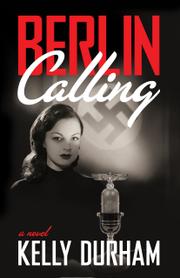 In Durham’s novel, a radio announcer working in Berlin spies for the Allies during World War II.

Irish-American Maggie O’Dea is beautiful, intelligent and resourceful—and she hates the English. In 1938 in Heidelberg, Germany, she falls for handsome Kurt Engel, who wants her to accompany him to Berlin. To remain in Germany, she must work. Due to her language skills, she’s quickly hired by an English language service and is soon preparing radio scripts that sing the praises of the German military while degrading the British. Maggie’s cohort is the obese and often intoxicated Clive Barnes (known on the airwaves as “Lord Lyon”) whose primary battle is fought with a bottle of gin. After Kurt is deployed, Maggie spends more time at work, growing ever closer to co-worker Dieter Schmidt. While recovering from a war wound, American soldier Erich Greinke is approached by war hero Bill Donovan, whose real-life exploits were portrayed in the film The Fighting 69th. One night when Clive is too drunk to go on the air, Maggie steps in, assuming the role of “Betty from Berlin.” Erich sees an opportunity to tap Maggie’s connections to the German inner circle, including her association with Hitler’s minister of propaganda, Joseph Goebbels. Maggie increasingly questions the information being disseminated by radio and coincidentally, is offered the dicey job of transmitting intelligence by code. Quick-thinking Maggie is a fully fleshed character who comes across as an auburn-haired Linda Darnell, with the power to fascinate and influence men on both sides of the Maginot Line. Her credible transformation from full-fledged believer in the German right of conquest to supporter of the Allies is handled with finesse. The author makes good use of characters from history, including Goebbels and also Donovan, who eventually becomes the head of the Office of Strategic Services. There’s chemistry aplenty in the wisecracking banter and the pacing is even. The narrative is well written and offers a lesson in history for those in need of a refresher.

Strong story with a capable heroine, an authentic historic setting and real-life personages to boot.