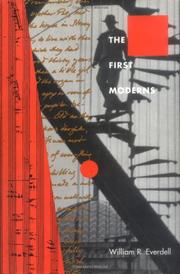 HISTORY
Released: June 1, 1997
THE FIRST MODERNS: PROFILES IN THE ORIGINS OF TWENTIETH-CENTURY THOUGHT
by William R. Everdell
HISTORY
Released: June 1, 1997
THE FIRST MODERNS: PROFILES IN THE ORIGINS OF TWENTIETH-CENTURY THOUGHT
by William R. Everdell
Everdell (The End of Kings, 1983) presents one of the more accessible studies of early Modernism (up to WW I), relying on a ``big name'' approach to dissect the meanings of one of the most slippery terms in all of cultural criticism. Using geographical benchmarks to elaborate on the subject of Modernism, Everdell first presents imperial Vienna, then Paris, and finally St. Louis as examples of Modernist trends precipitating, emerging, and evolving. Dismissing Virginia Woolf's assertion that the Modern era began ``on or about December 1910,'' Everdell nimbly places such supposedly pre-Modern thinkers and artists as Mach (whose name is still used to denote the speed of sound), Seurat, and Whitman in the long evolutionary trend of Modernism, demonstrating their influence on developments like relativity theory (Einstein), the invention of film (Thomas Edison), and High Modernism (Pound, Eliot, Williams). This inclusive view expands the commonly accepted Modernist canon; it also stresses the crucial nature of influence, showing, for instance, Picasso's cubism and Kandinsky's abstract expressionism prefiguring their interwar works, and the atonal music of Arthur Schoenberg exerting influence on Philip Glass. Everdell presents an intriguing chapter on Valeriano Weyler y Nicolau, governor of Cuba, and his grisly contribution to Modern culture in 1896: the concentration camp. Hitler and Stalin get only passing references, but it is the exclusion here of Michel Foucault in the discussion of penal institutions that seems glaring. Similarly, the absence of Ferdinand de Saussure in a chapter on phenomenology, which includes Bertrand Russell and Edmund Husserl, omits a giant in the field of sign study. Still, these are minor lapses in what is otherwise a sturdy and erudite overview of one of the most complex periods of thought. Read full book review >