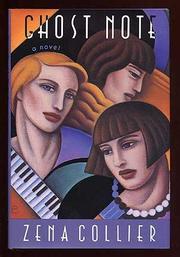 FICTION & LITERATURE
Released: June 1, 1992
GHOST NOTE
by Zena Collier
FICTION & LITERATURE
Released: June 1, 1992
GHOST NOTE
by Zena Collier
Three sisters react to their mother's recent death and the unexpected return of the father who left home 30 years earlier—in Collier's second effort, which, unfortunately, shares the problems of her first (A Cooler Climate, 1990): you can see the wheels turning, but there's just no traction. Lois, the oldest sister—rigid, controlled, and determinedly conformist—works efficiently on clearing out her mother's house and dividing the property fairly, all the while consumed with worry about her son Ned, who's dropped out of college to live on the fringe of society. Diane, a few years younger than Lois and still single, is a successful freelance writer and chain-smoker who agonizes over commitment. Should she agree to marry Adam, the kind, intelligent, honest, and attractive man who loves her? Ella, the youngest sister, is retarded. Her reaction to the death of the mother who was devoted to her is simple grief. She spends hours in the rocking chair in her mother's bedroom, rocking, rocking. Into all this walks 70-year-old Charlie Hazzard, jazz musician and erstwhile father. Charlie lights up the house—and the novel. He's the most substantial character here, and his conflicts over his two lives ring true. But before things can really be resolved, Collier dispatches him to a final—and premature—fate. Without him, the storyline falls to pieces. The three self-involved sisters, cut out with a heavy hand, end up being paper-doll-thin. Their stylized, almost archaic way of speaking also distances them from us. ``My, you're a cool customer'' is Lois's response to Charlie's request for a cup of coffee when he first arrives at their door. ``Sorry we weren't expecting the return of the prodigal father or we'd have laid in a stock.'' Strong words, weak message—in all, a bitter brew. Read full book review >