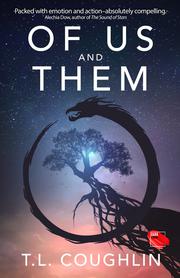 OF US AND THEM

A debut YA SF novel about a young woman coming to terms with her destiny.

On 22nd-century Earth, 17-year-old Evren’s upbringing has centered on the unalterable fact that she will someday serve as the 12th and final Paladin—a human chosen as a physical vessel for the Leviathans, a powerful, mysterious alien species. In the opening pages, Coughlin introduces this species as “gods among men,” with a goal to “save Earth and push humans into their next state of evolution.” Evren undergoes rigorous physical training to prepare her body for its purpose, and Coughlin introduces her in early sections as a determined young woman who, despite her singularity of purpose, shows a healthy curiosity about the world around her—a perspective that’s often at odds with that of her mother, Ignis, who leads Nexum, the organization working to prepare Evren for her fate. Early on, the novel falls into the common fantasy-genre pitfall of introducing the world’s mythology too quickly instead of slowly peeling back its layers as the story goes on. However, once the novel starts hinting at mysterious forces that seek to prevent Leviathans from merging with Paladins, Coughlin’s writing tightens up considerably—particularly after another Paladin is found dead. From there, the teenage protagonist—and the reader—starts learning more about Nexum, and her increased knowledge coincides with her doubts about her mother’s role in her life. Soon, her relationships with other Nexum trainees effectively take center stage, and the work settles into a well-paced mystery plot. Throughout, the secrets of the Leviathans, and their mystical relationship to humans, loom enticingly in the background, waiting to be revealed.

A tightly written tale that, after a slow start, grounds itself in engaging, mysterious lore.