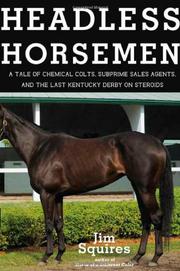 At the 2008 Kentucky Derby, second-place finisher Eight Belles broke both ankles and was immediately euthanized—an event that took place on live television and brought to public attention the myriad abuses that plague the sport. Though Eight Belles was clean, the use of performance-enhancing drugs, writes Squires, has become a major problem. More often than not, the most prized horses—quick to mature, preternaturally muscular and, above all, fast—receive massive injections of anabolic steroids and other substances, including marijuana, cocaine and even cobra venom. At the same time, the prices for the best horses skyrocketed as two competitors—the ruling family of Dubai and the Irish conglomerate Coolmore—spent millions trying to outbid each other. In 2006, Coolmore bought Green Monkey for $16 million, but the horse never won a race and is now retired. But there was still money to be made, and new, inexperienced buyers entered the market, pushing up demand and prices, while often being bilked by unscrupulous selling agents. Yet what was being produced, the author helpfully notes, was a “chemical herd” that won few races and often could not successfully breed due to the damage caused by steroid abuse. Eventually, overproduction of a faulty product forced demand to drop as quickly as it had risen. The industry was in crisis, and the lack of strong leadership only exacerbated the problems. Horse racing has long been dominated by an aging group of industry elites who fear change and anyone who pushes for it as challenges to their authority. As a result, little has changed—and probably won’t without federal intervention.

The author assumes that readers understand horse-racing better than is probably the case, but he offers a well-told cautionary tale about greed and willful inattention.